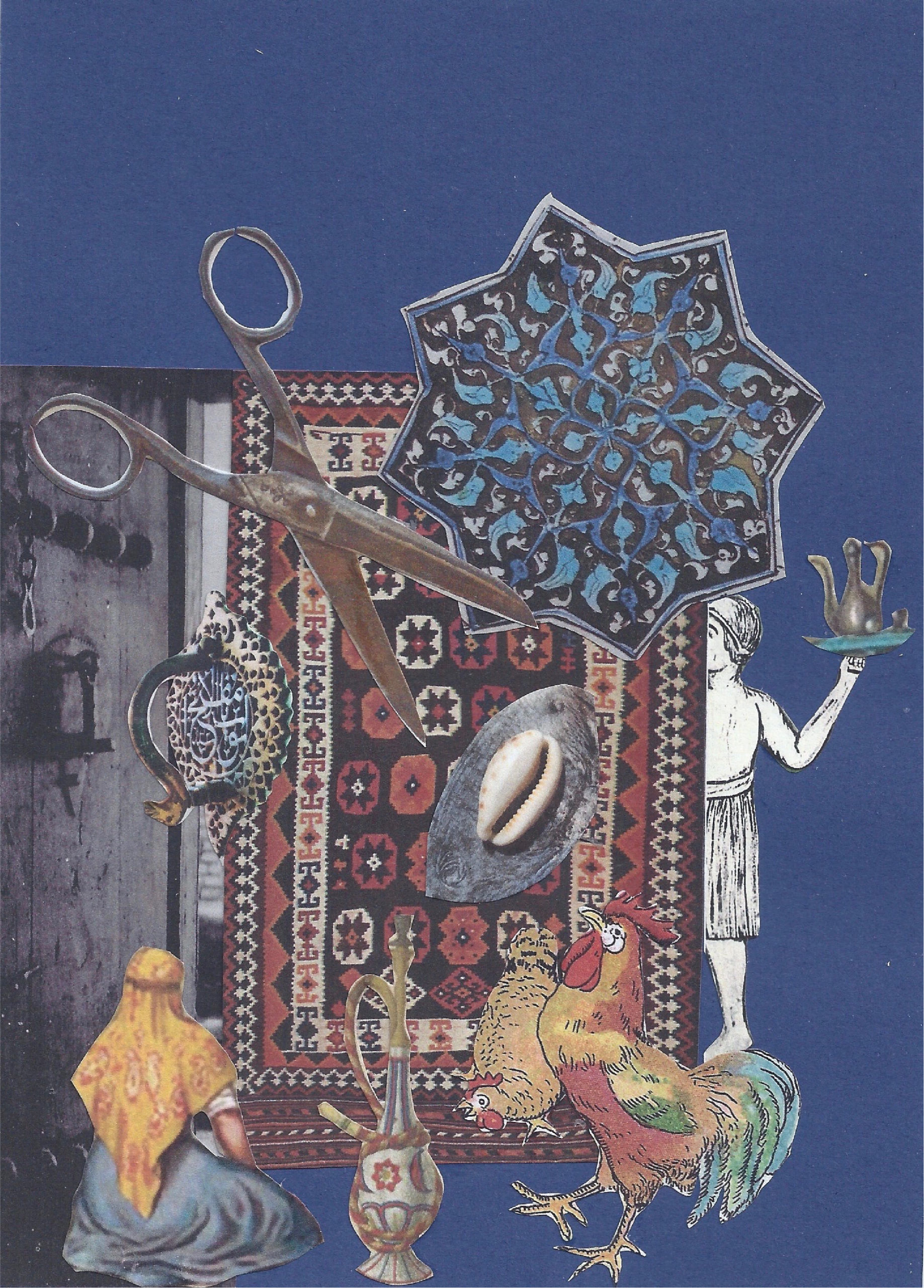 The Arrival of Her Ladyship
Edition of 10
2019,
Archival print of a mixed media collage on somerset artist paper,
23 x 16.50 in 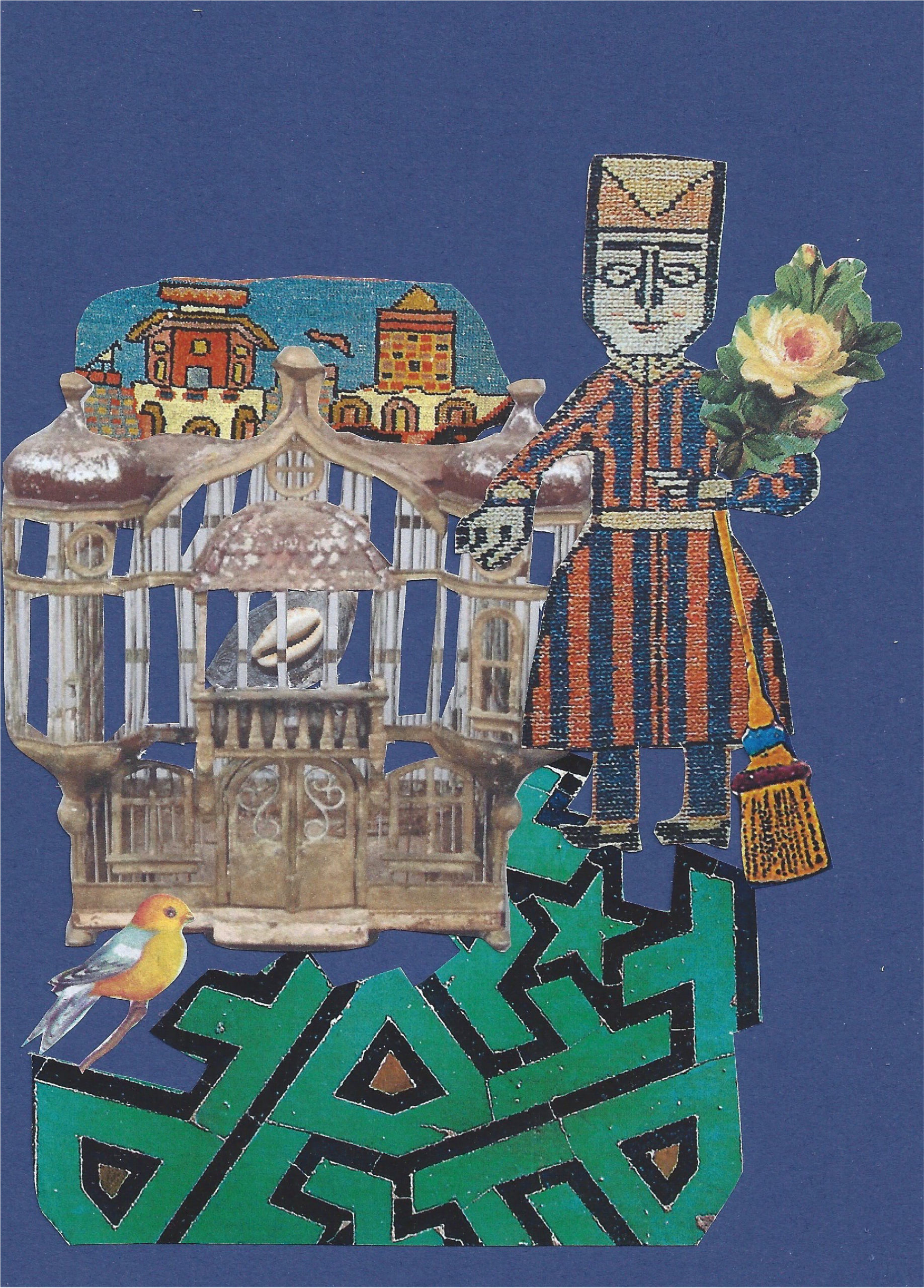 Her Ladyship in the Golden Cage
Edition of 10
2019,
Archival print of a mixed media collage on somerset artist paper,
23 x 16.50 in 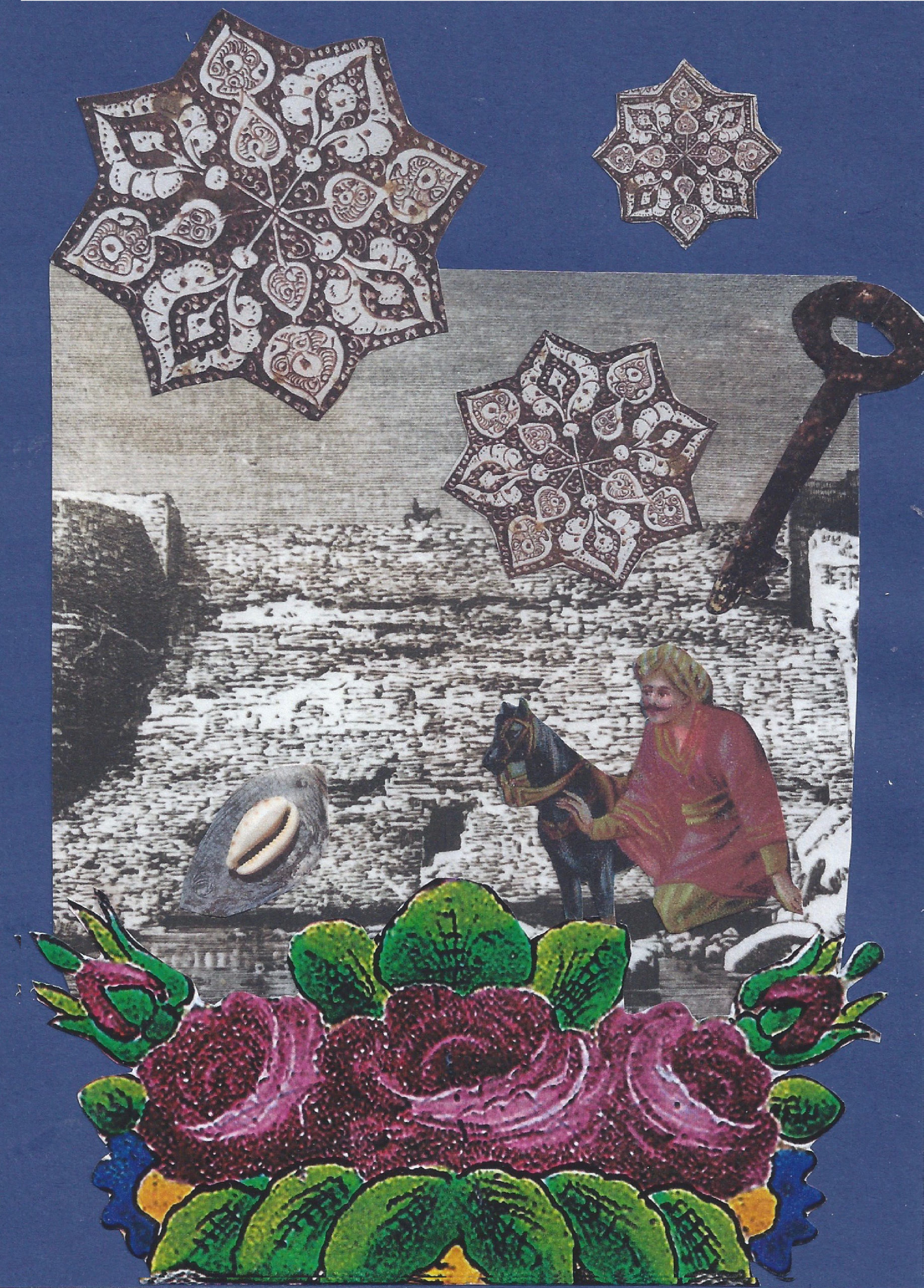 Her Ladyship Meets a Young Prince
Edition of 10
2019,
Archival print of a mixed media collage on somerset artist paper,
23 x 16.50 in 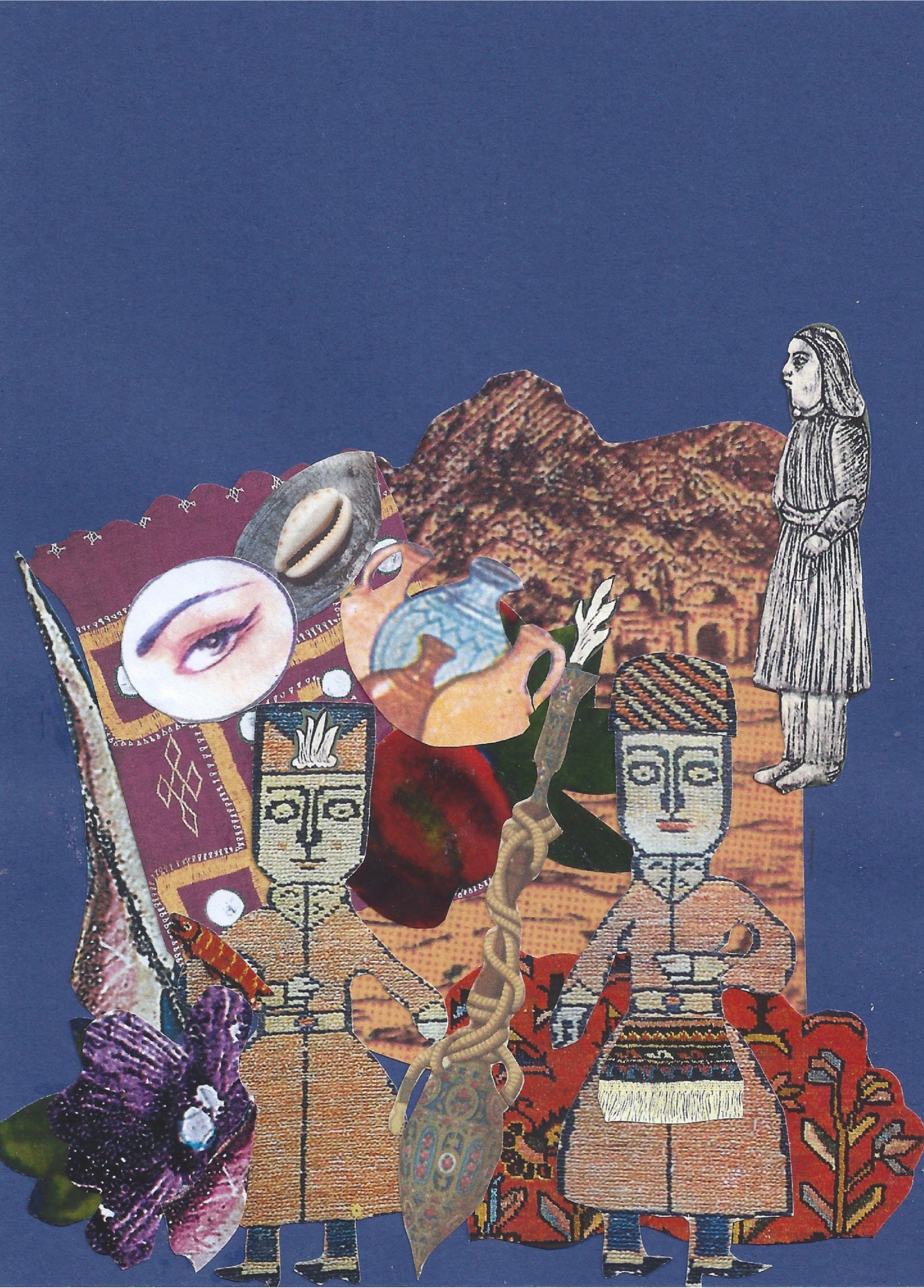 The King Asks for Her Ladyship’s Hand
Edition of 10
2019,
Archival print of a mixed media collage on somerset artist paper,
23 x 16.50 in 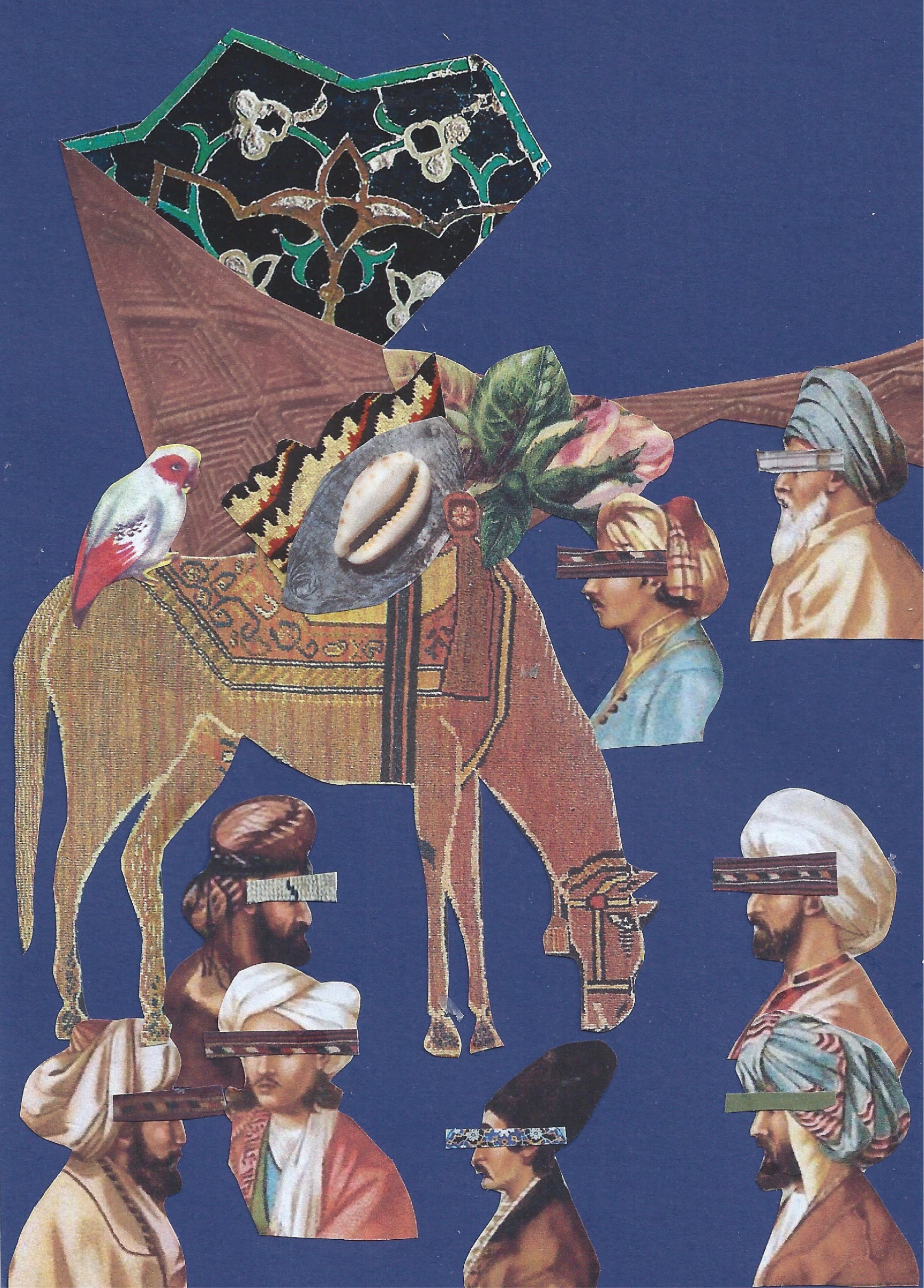 Her Ladyship Visits the Hammam
Edition of 10
2019,
Archival print of a mixed media collage on somerset artist paper,
23 x 16.50 in 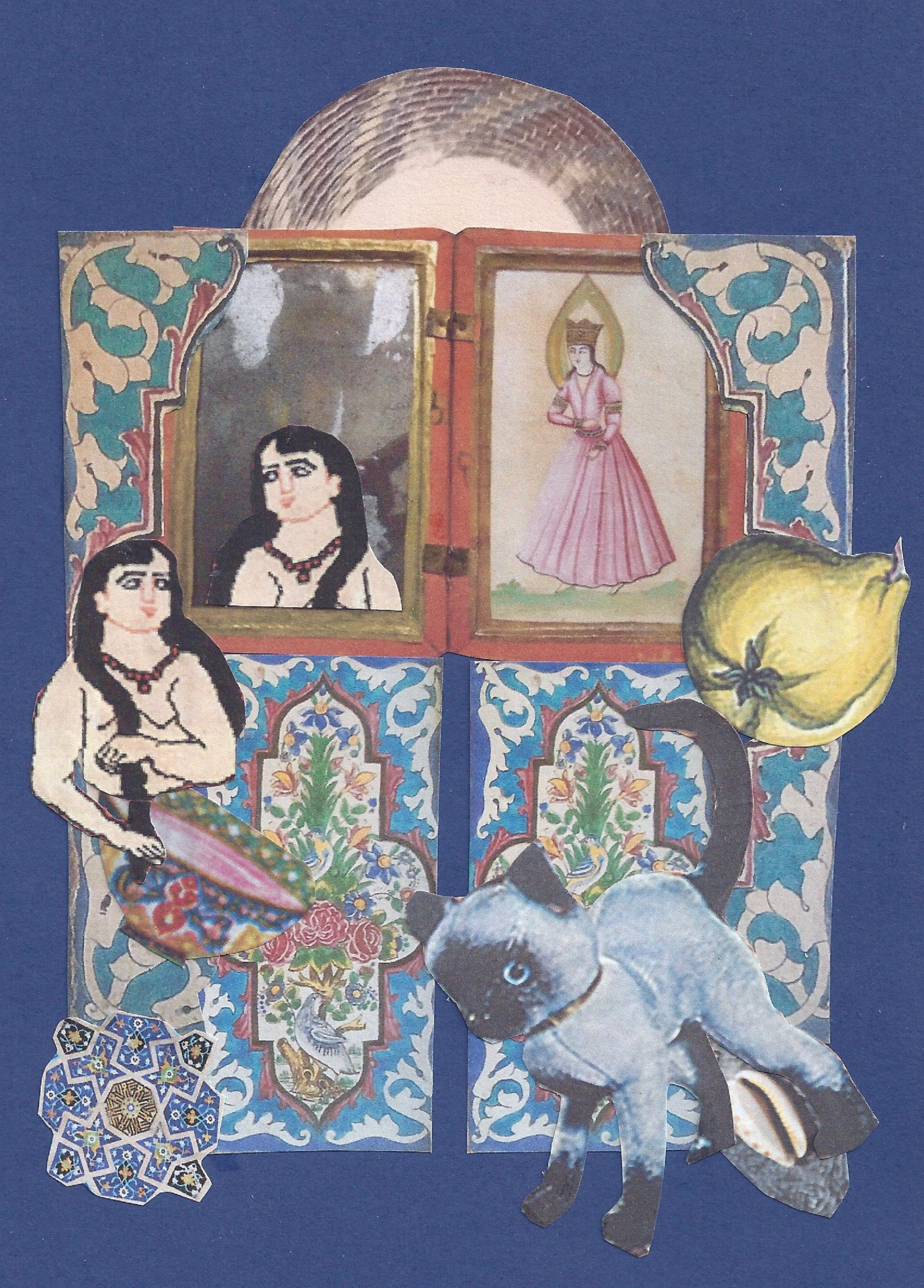 Her Ladyship Makes a Pact With a Hungry Cat
Edition of 10
2019,
Archival print of a mixed media collage on somerset artist paper,
23 x 16.50 in 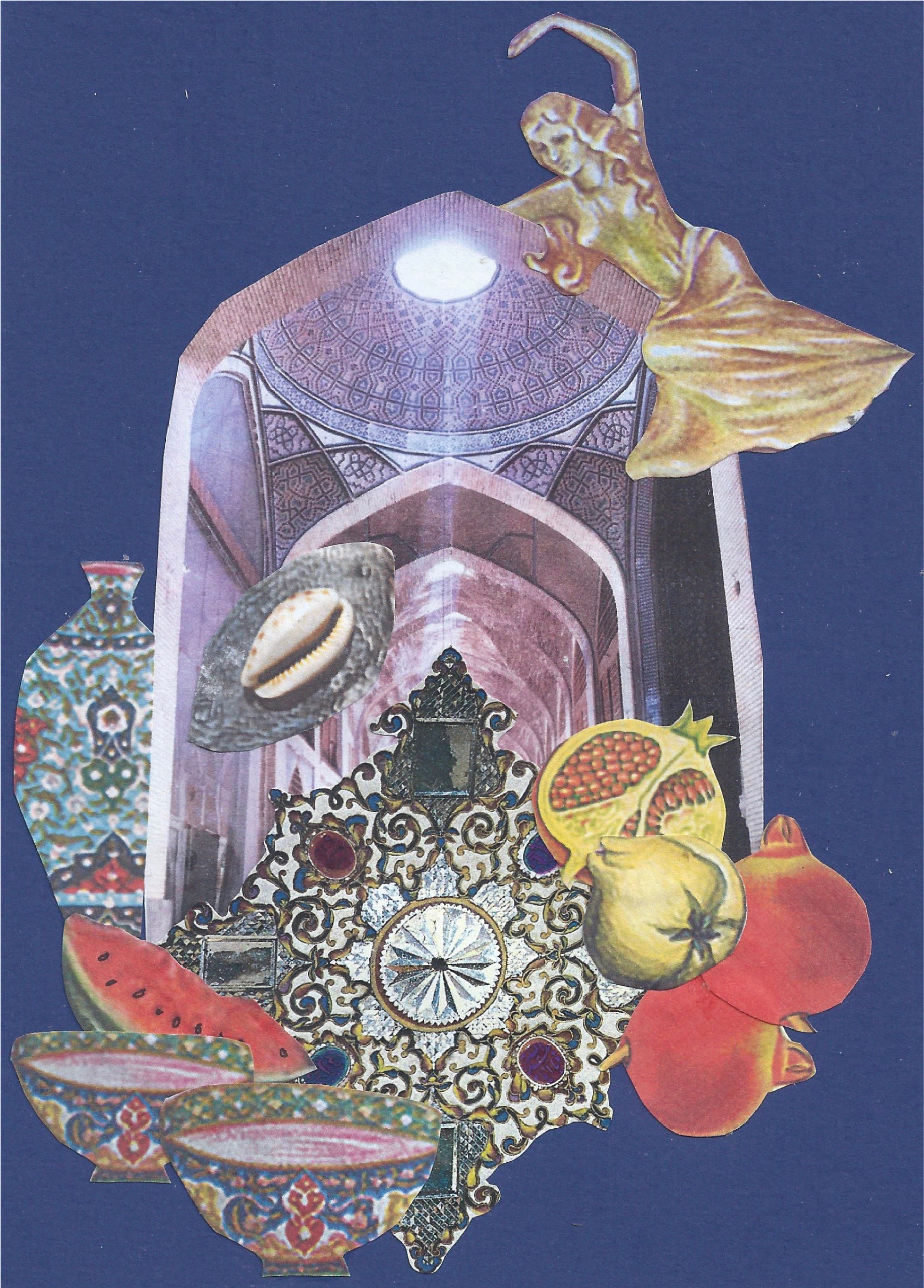 A Fairy Grants Her Ladyship A Wish
Edition of 10
2019,
Archival print of a mixed media collage on somerset artist paper,
23 x 16.50 in 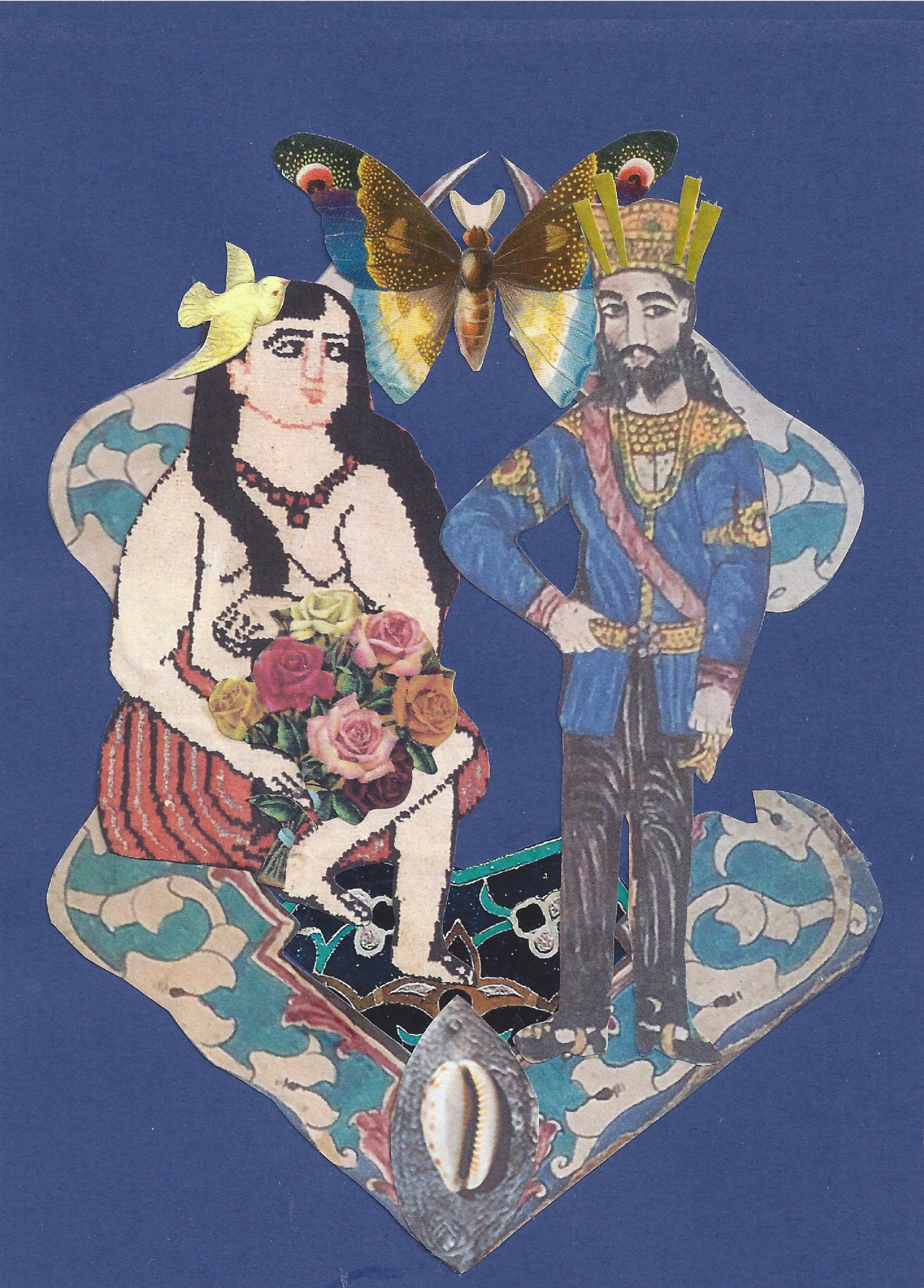 I grew up reading fairytales like many other kids of my era. I loved how I could imagine myself being a part of the story. I could be riding horses, sailing ships, going hunting or even searching for a golden egg. However, I was always slightly uncomfortable if the tale was just about finding a prince to marry. One fairytale especially always scared me: the Little Mermaid. While some friends loved the mermaid’s long blond hair in illustrations and the blue-eyed prince, I found the idea of giving up your voice to walk with painful feet was terrible. Surely it was a much better idea to be able to sing, talk, laugh and swim around the blue sea. To me having a voice was better than being able to walk!
I grew up, but I continued reading fairytales and folk tales from around the world. It was by luck that I came across the story here. The small and long out of print book of obscure Persian fairytales from the 19th century came into my hands almost 20 years ago. I was so intrigued by the overt sexuality, cruelty and the humour of all the stories that I read them many times throughout the years. However, my favourite was always The Adventures of Her Ladyship. I admired her confidence, resilience and, of course, her voice which would not be silenced. A voice which we all have and most would never give up for anything. And you never know, you might even catch a king with it.

As a child I was told many fairytales of beautiful princesses and brave heroes. They faced life’s challenges and always emerged happy and victorious. I believed in fairytales. My chosen icons lived expectantly, hoping, wishing, dreaming. They were loved, admired and fulfilled many of their hopes and dreams. But what happened to them in the end? Did these fairytale icons really live happily ever after? And if not, what chance do we have of a fairytale ending? 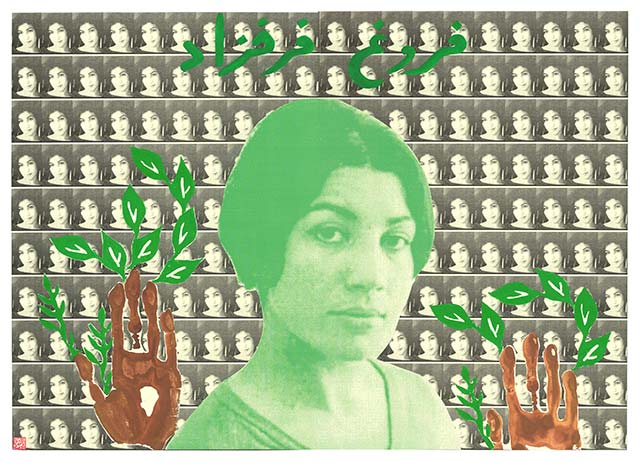 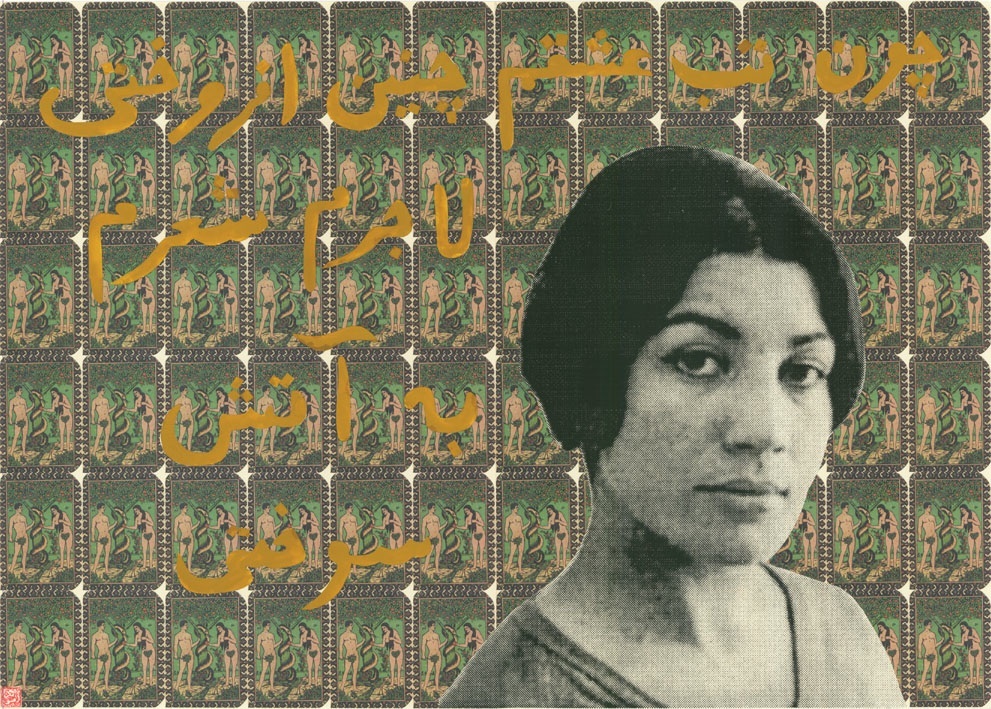 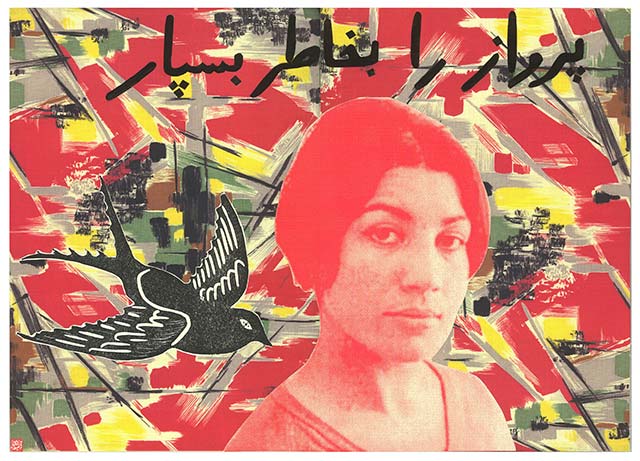 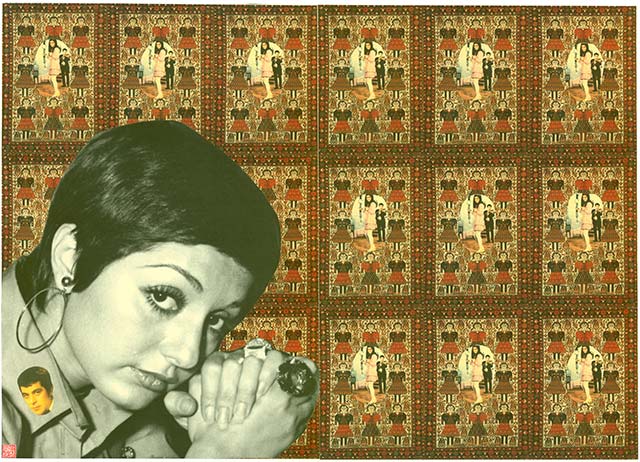 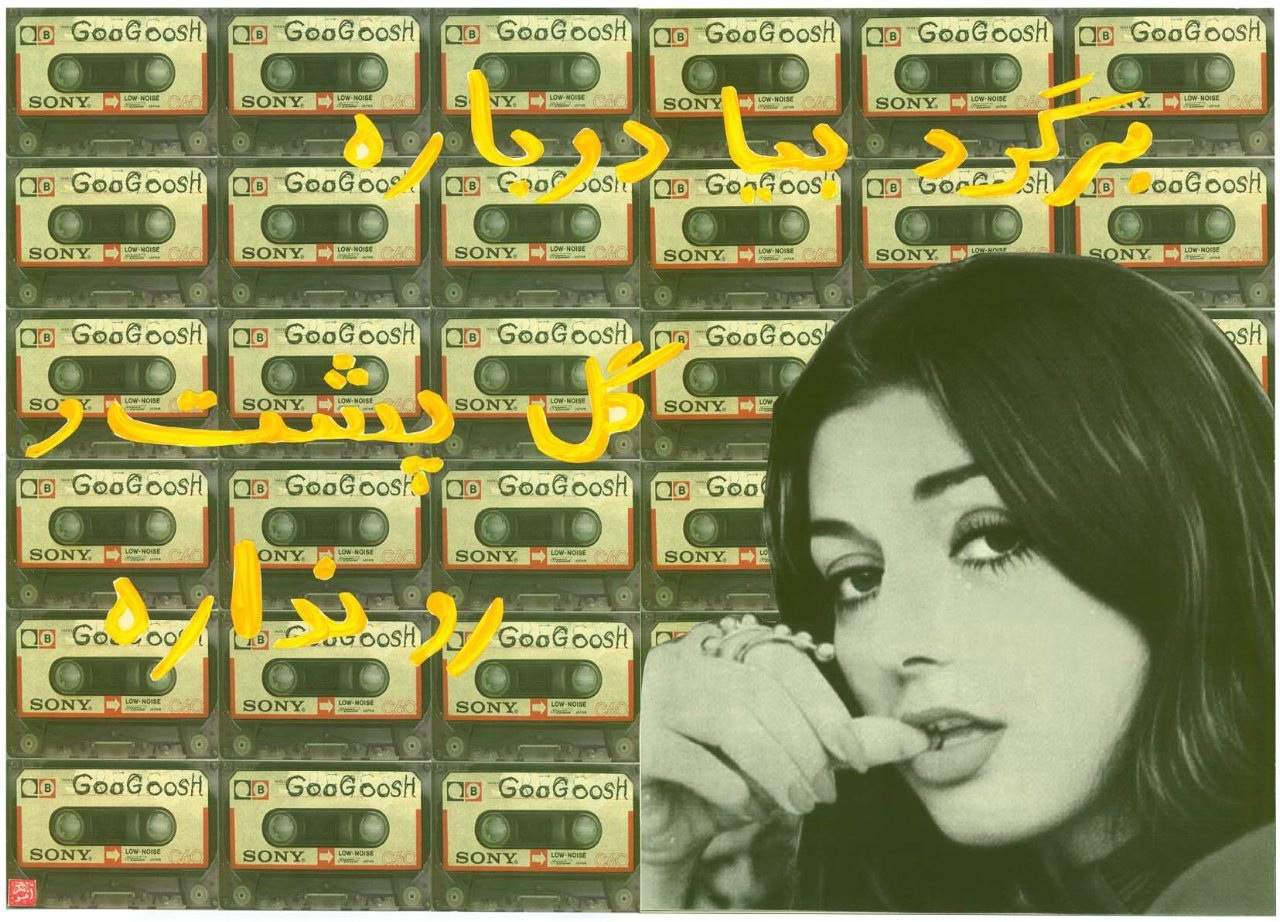 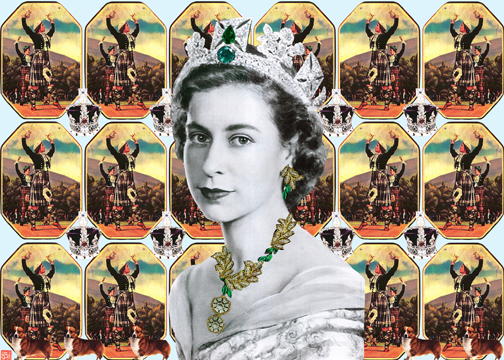 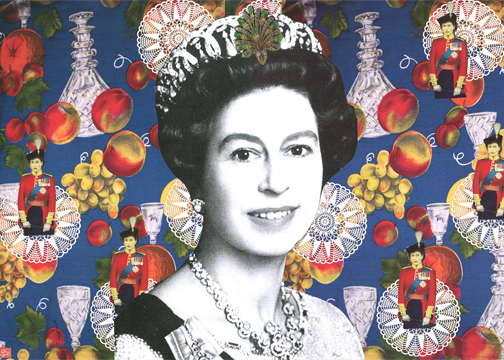 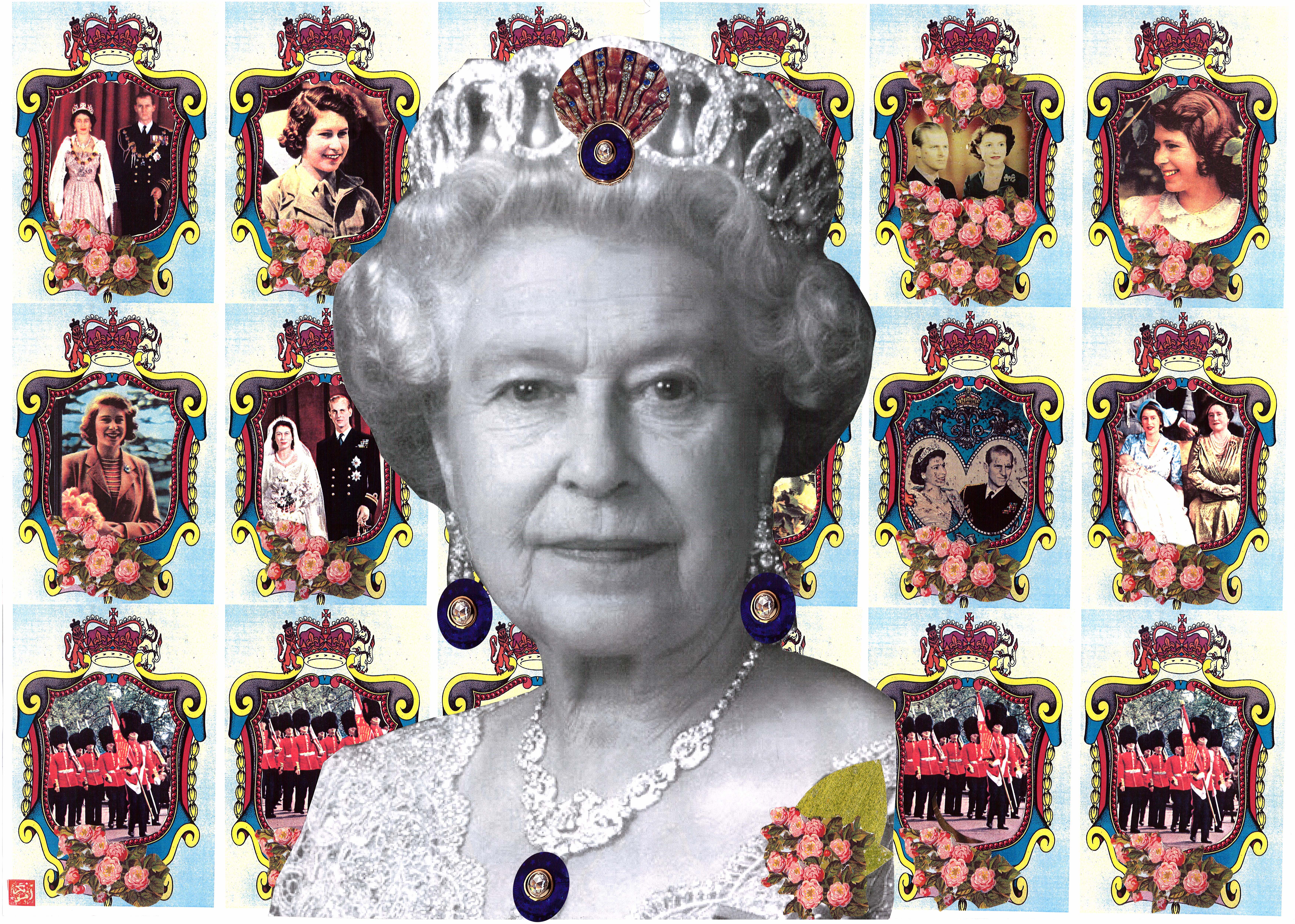 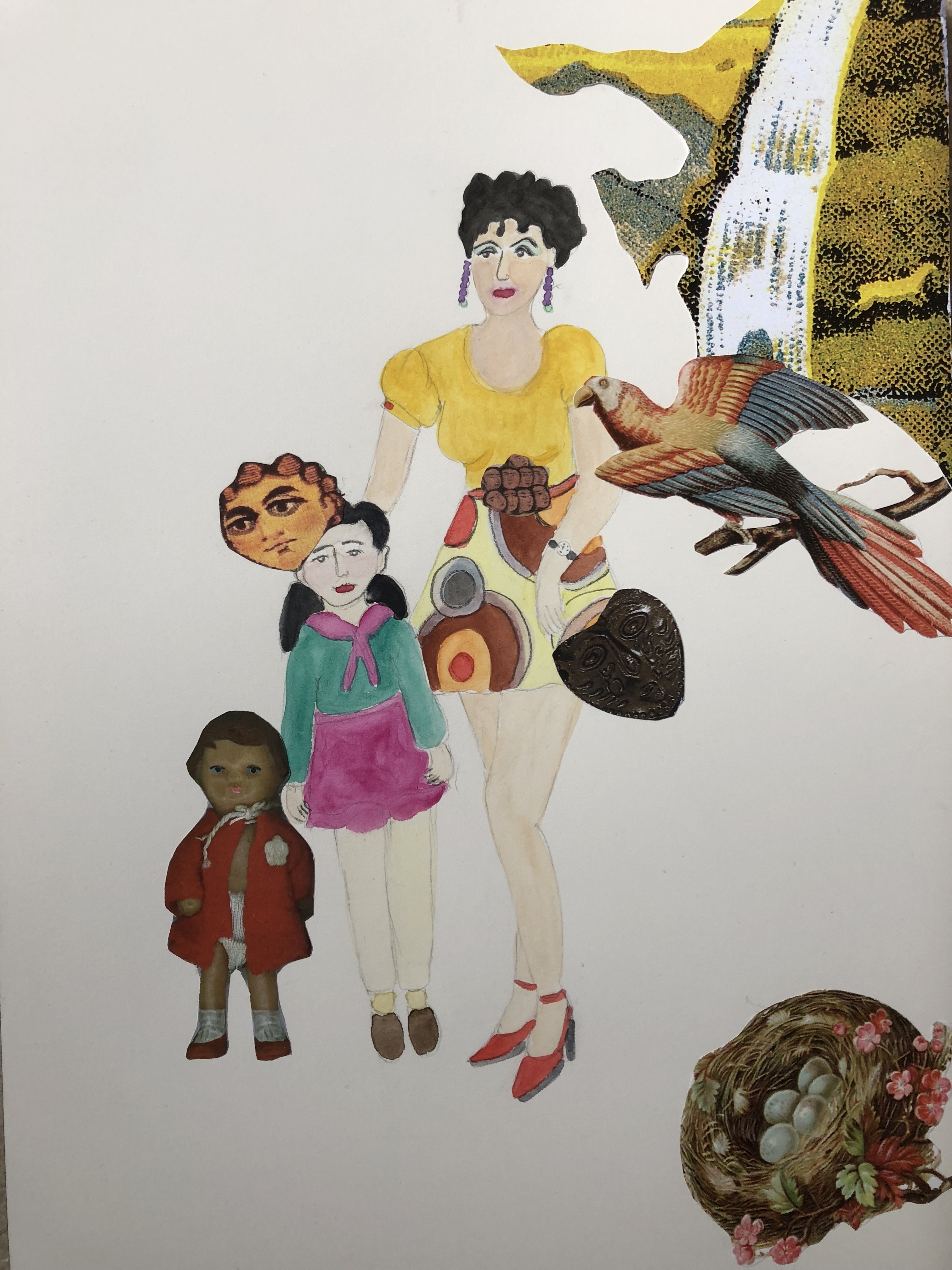 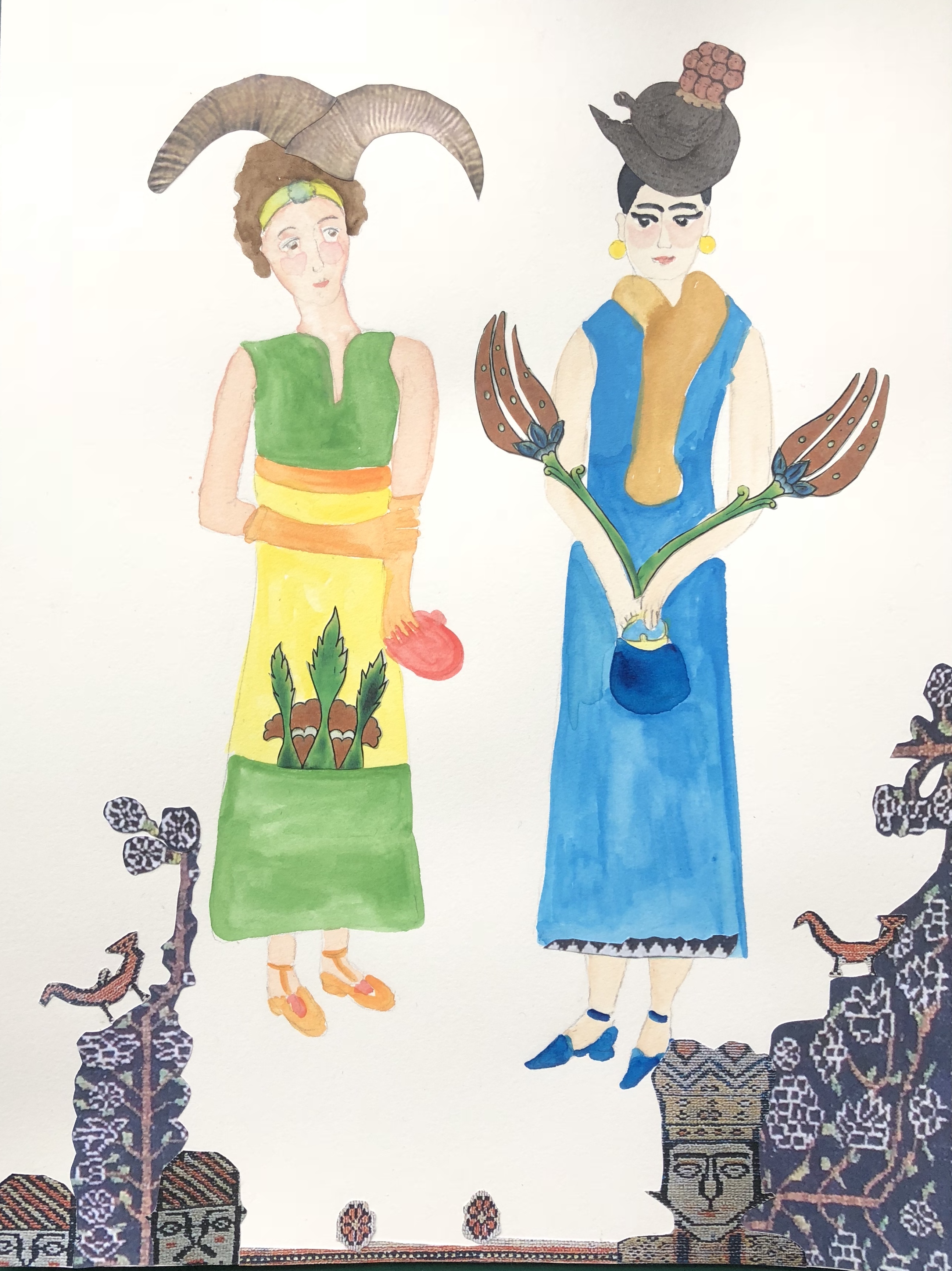 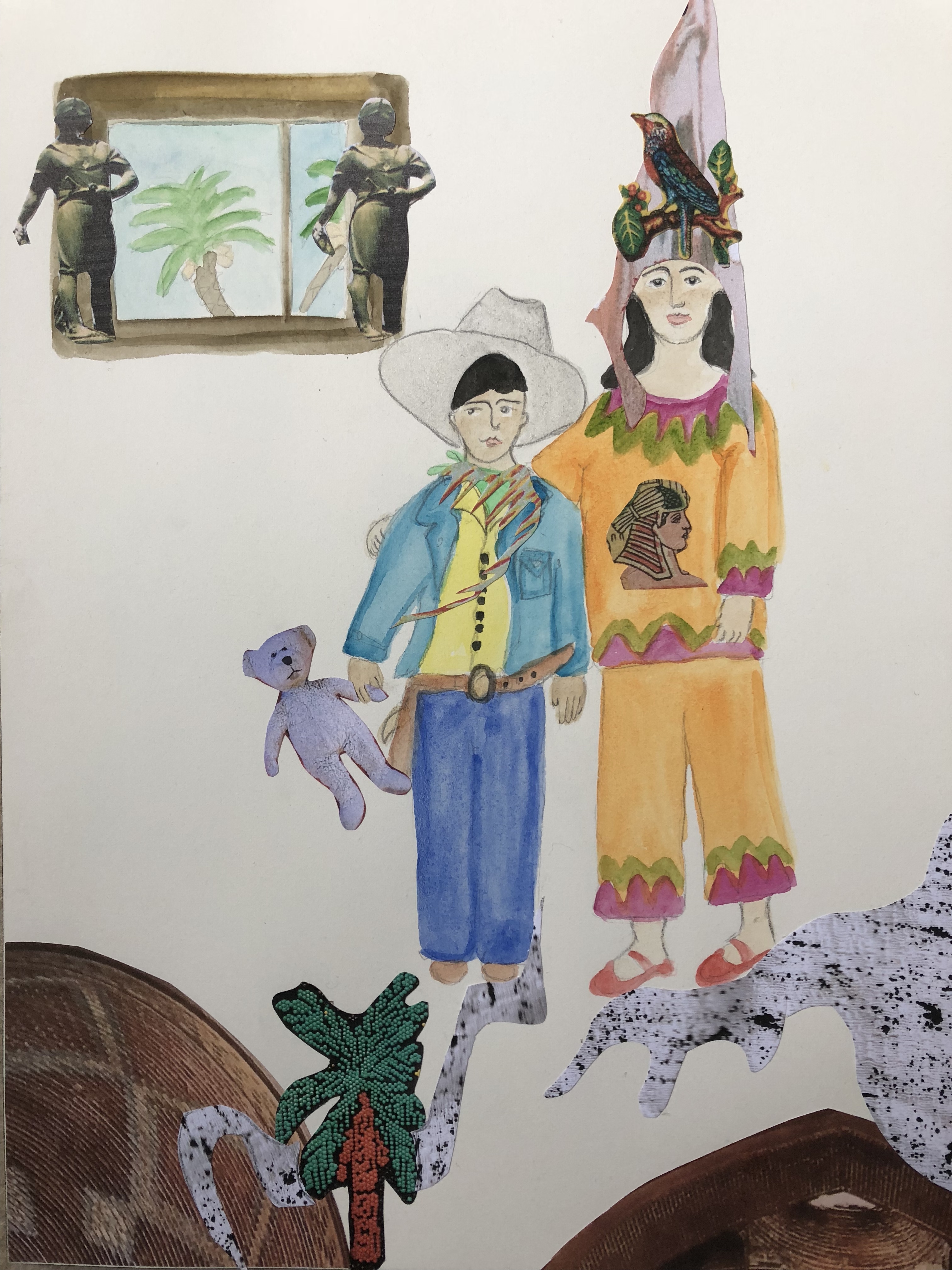 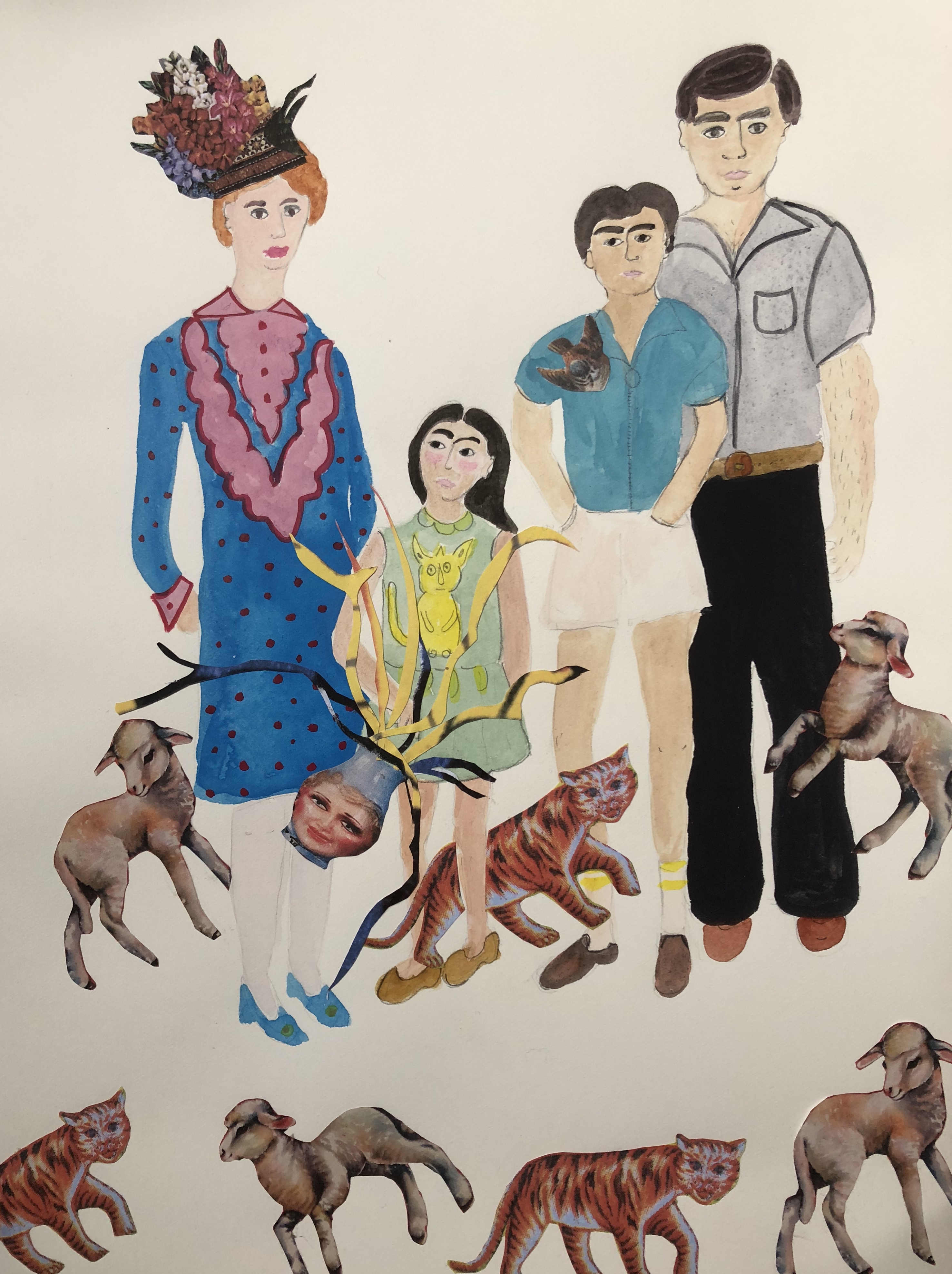 The last couple of years have been strange. Each morning I dare myself to look at the news. Life has been complicated both near to home and far away. I have felt powerless to fix or change anything personal or in the bigger picture. As usual, I have turned to the comfort of making art, not trying to solve anything but simply to heal. I couldn’t stop the breaking but I could fill the cracks. Along with making art, the power of poetry and literature helped me. This series is a marriage between the words that have stayed with me and the images that spoke to me. (2016).

Many years ago, in an English language school I went to after leaving Iran, I learned a new game which was especially popular with the students from the Far East. It went like this: someone would mention an animal and the rest of us had to imitate the sound that animal makes in our language.

Everyone found it terribly funny that, for example, a dog goes “woof” in English, but “vaag” in Persian. After all a dog is a dog, whether English, Iranian or Japanese.

How can we look inside and when we do, what do we see? I have recently been relearning a lot about my culture, or I should say, one of my cultures, as I identify with several. I refer now to Persian culture. We all know about the poetry, the great history and the unfortunate political events, but what about the essence, the real pestle and mortar of a society, which in my opinion is its humour? It’s very Persian to use language in many different ways, and so create humour. For example, in Iran we grew up exchanging all sorts of expressions from an early age. Someone would use one expression, we would laugh, shrug our shoulders and would use another one in reply. We would converse in this way, or as we say in Farsi, “we said flower, we heard flower”.

I have relearned forgotten expressions along with many new ones. And then some became an image, an idea in my head. There were a few crazy ones and a couple of problematic ones, but I went along with the joy ride and it was fun.

The result is my series, but nothing really means anything, until you give it life. 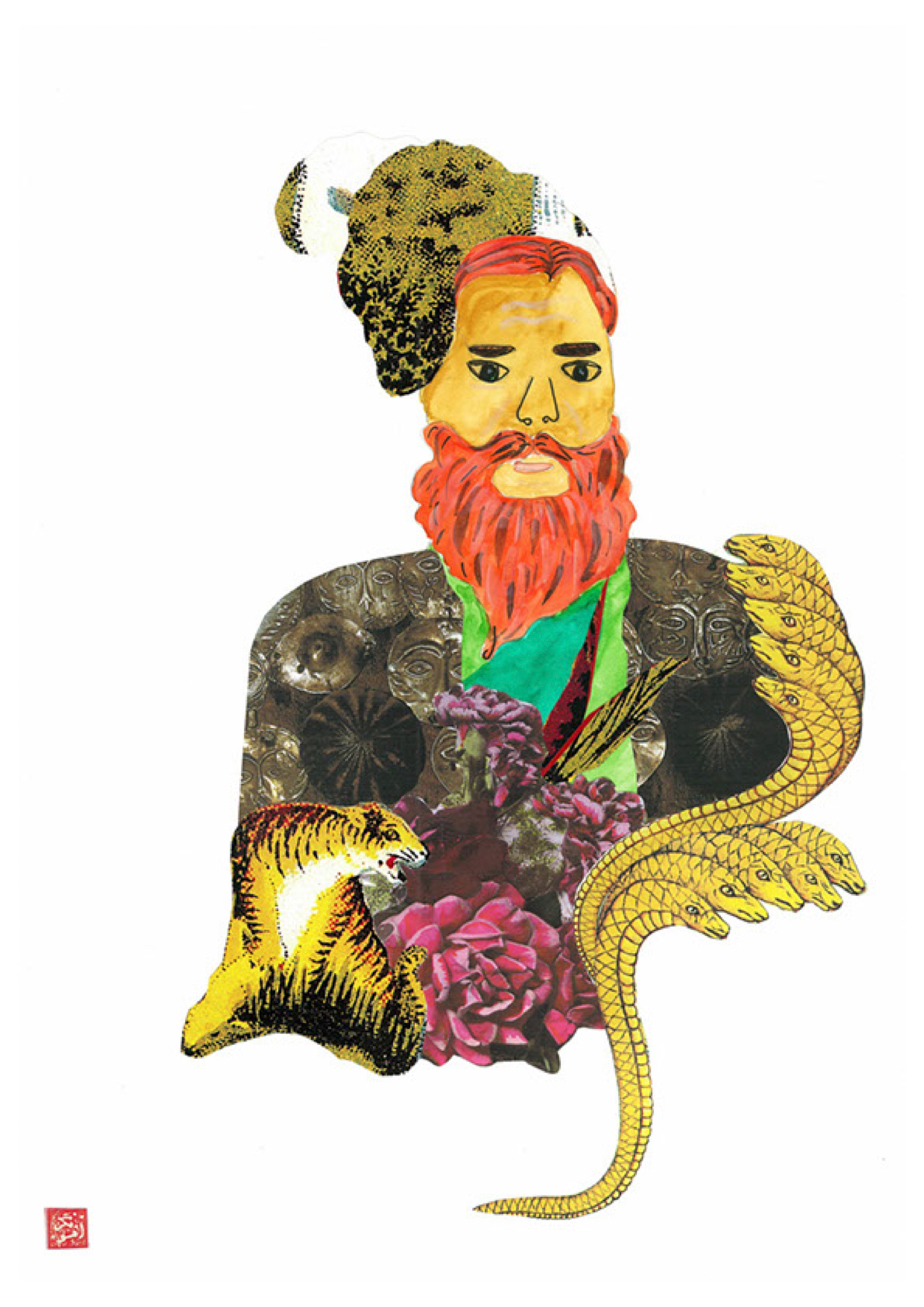 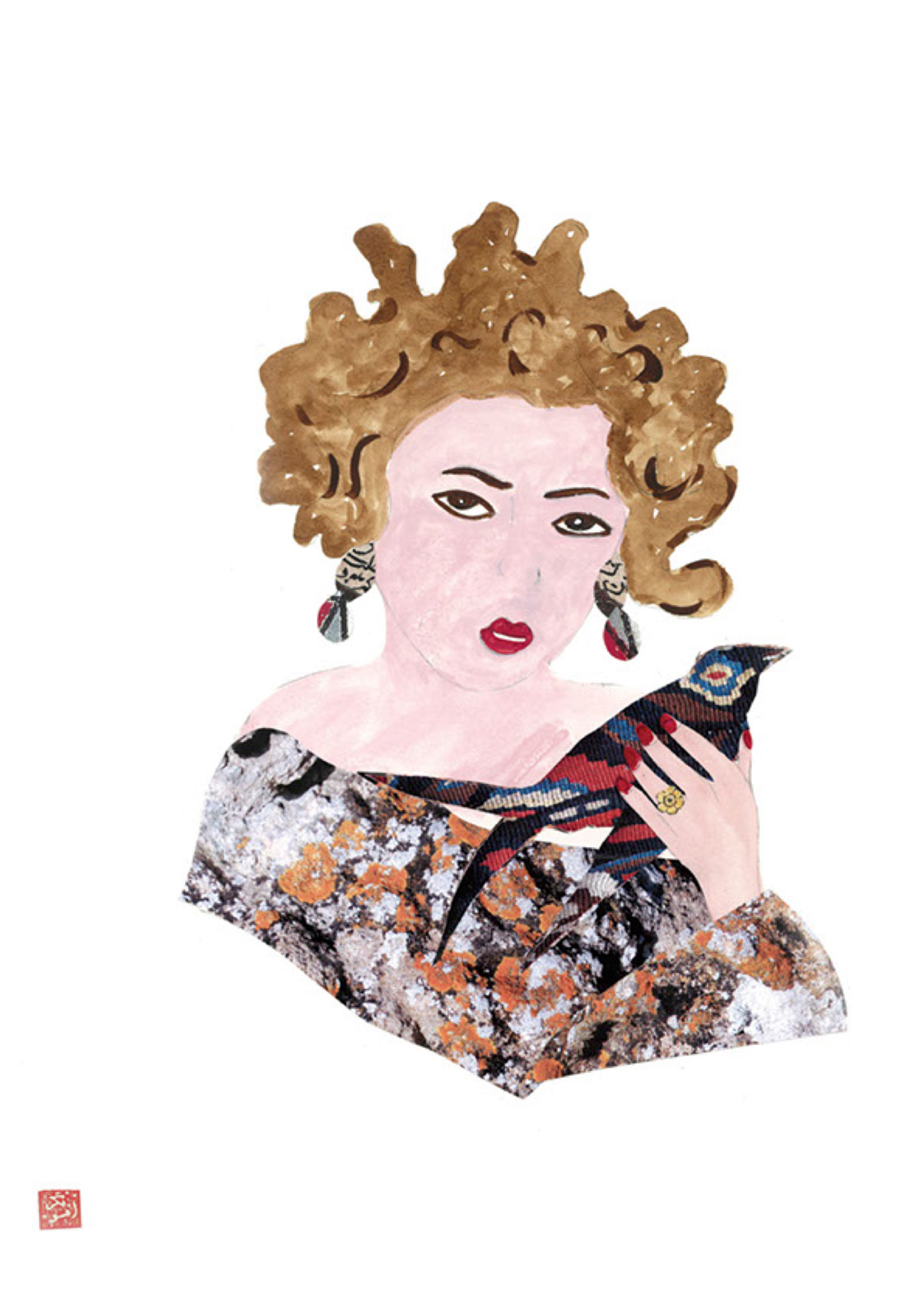 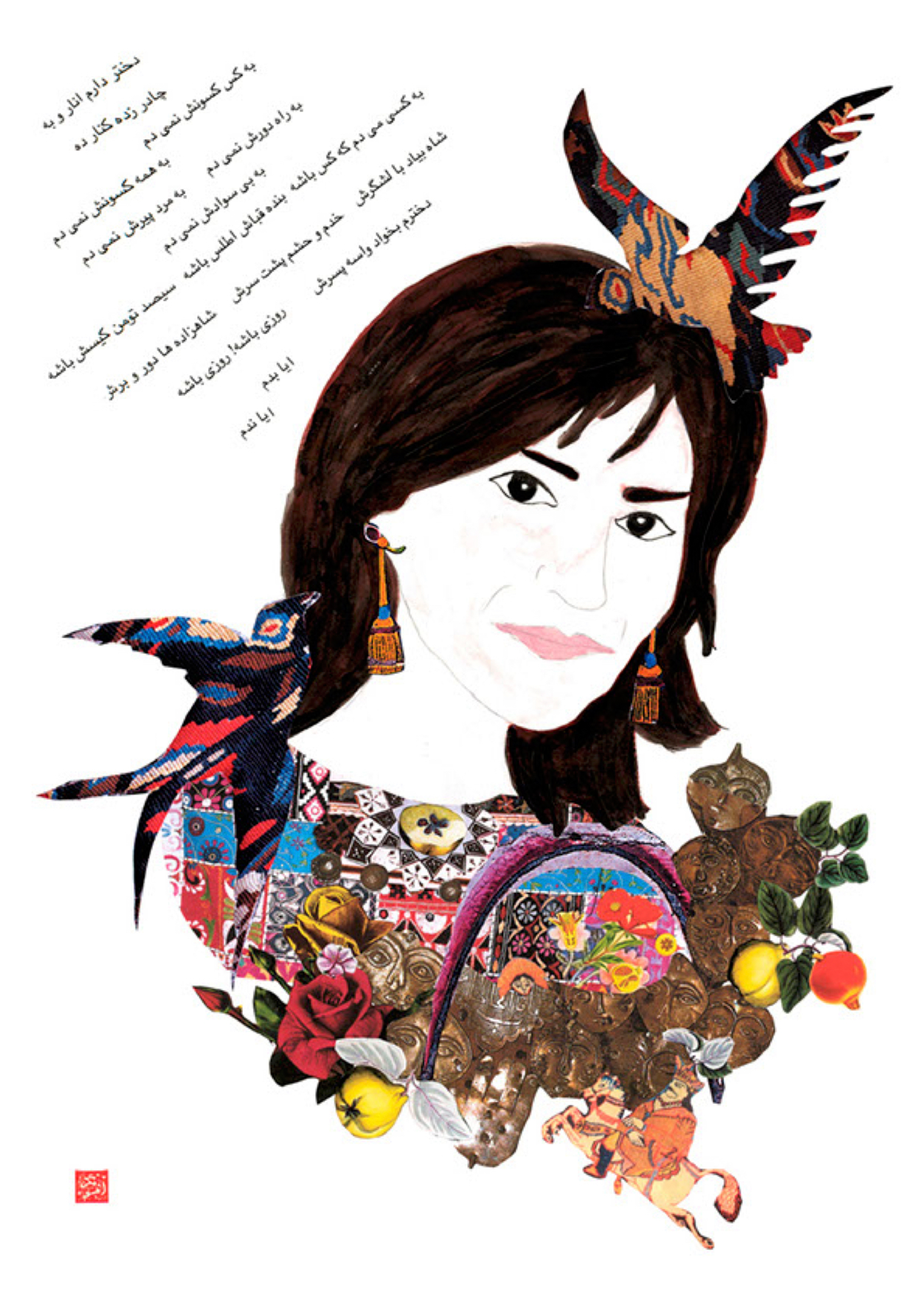 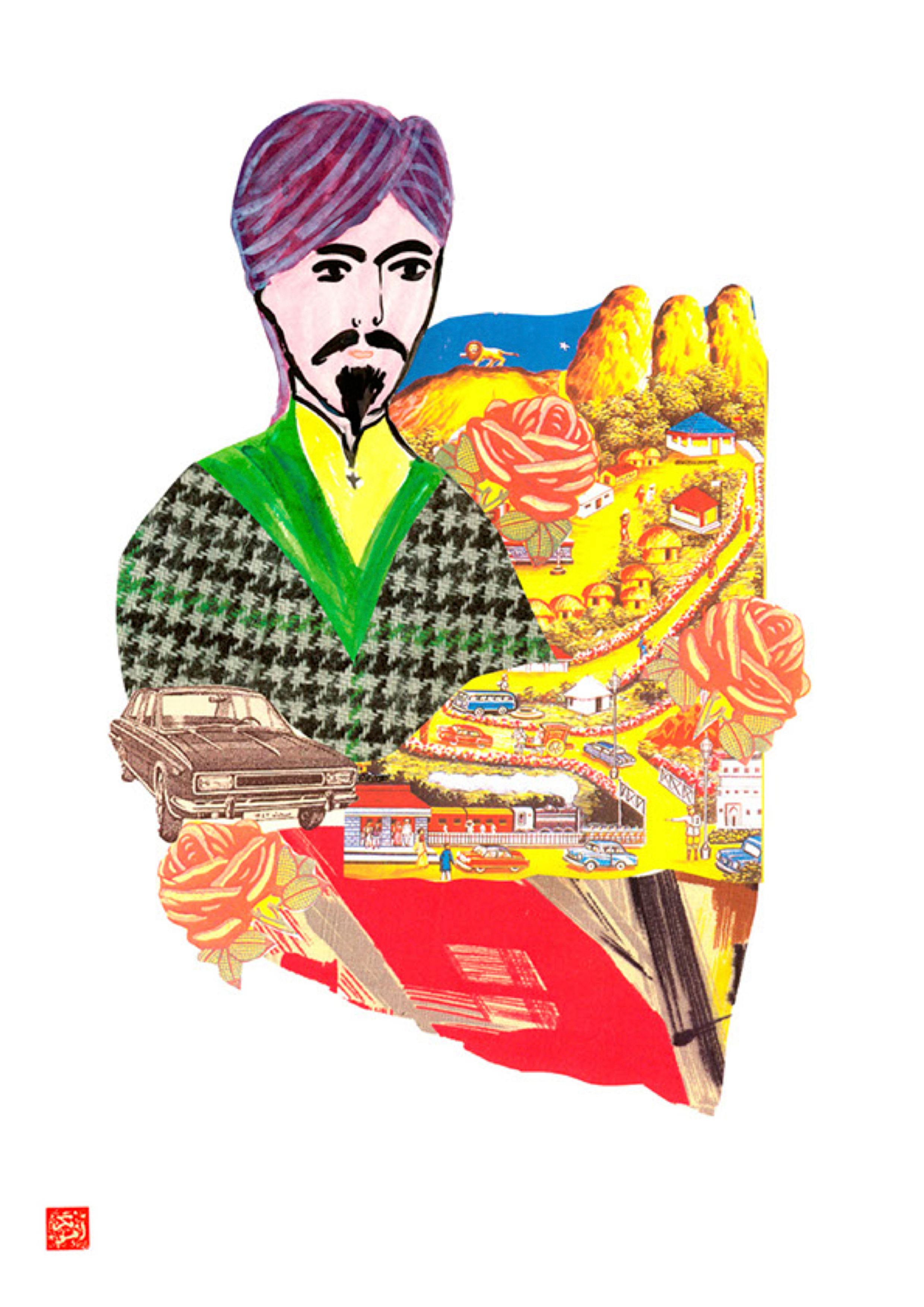 The idea for an artwork usually comes in a single burst. Then a little sketch emerges. As days go by, my mind returns to it again and again until the image is finalised. If it’s a straight-forward lino-cut, I then draw the image on the lino in pencil, cut it out and hand-print it on Inbe Japanese paper. When combining linos with photographs, I often find that I have already taken a photo which works well with the idea. Sometimes the idea comes from one of my photos. If not, I take photos until I have one which I’m happy with. I then scan that onto Zercall paper and hand-print the lino image on top. I collect vintage photos, old advertisements, pieces of paper with interesting colours or patterns or fabric, which I use for my collages. After cutting, I glue these on top of linos which are hand-printed on recycled Sri Lankan paper or Japanese Inbe. My etchings and photo-etchings are printed on to Sommerset paper using a press. I mainly use Charbonnel or intaglio inks. 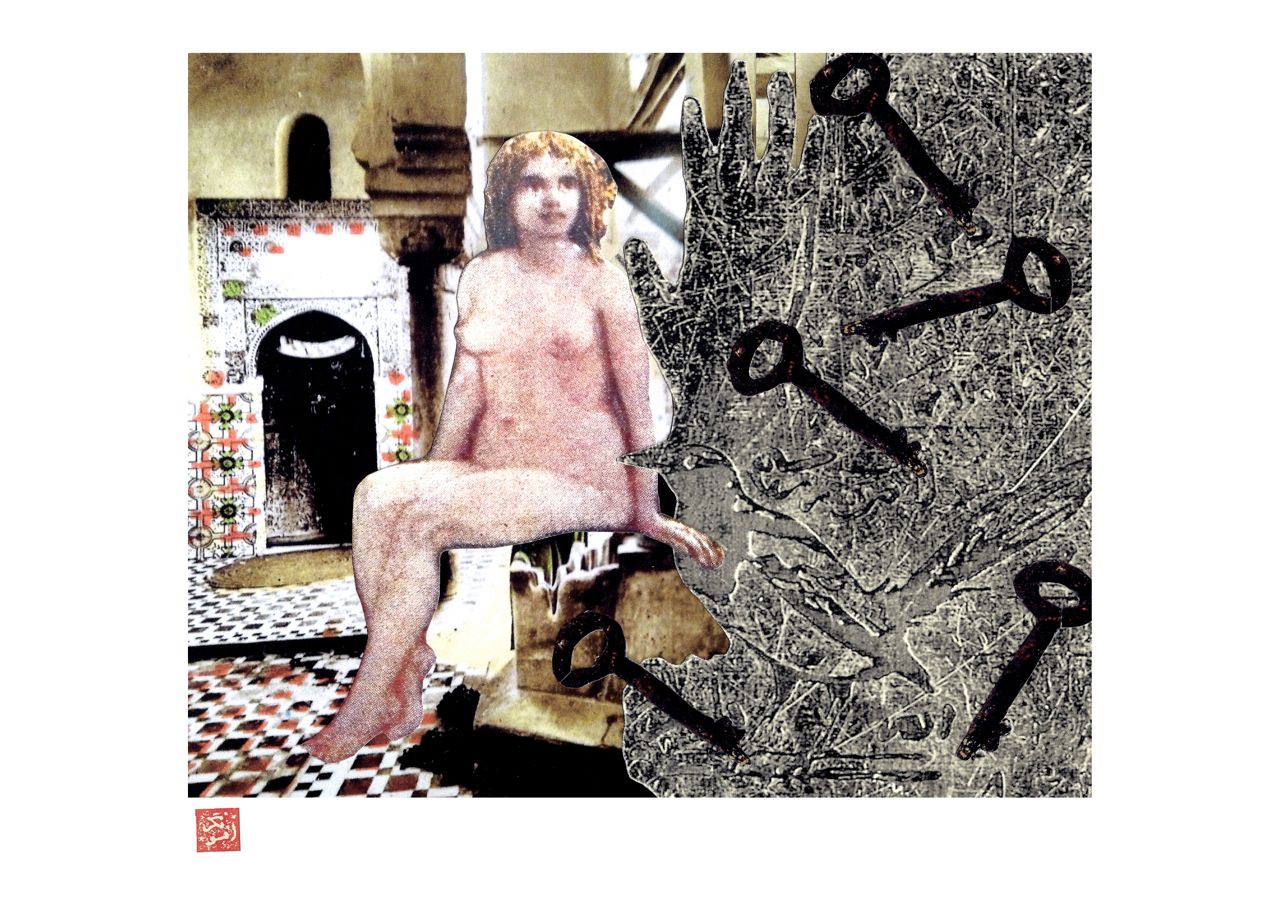 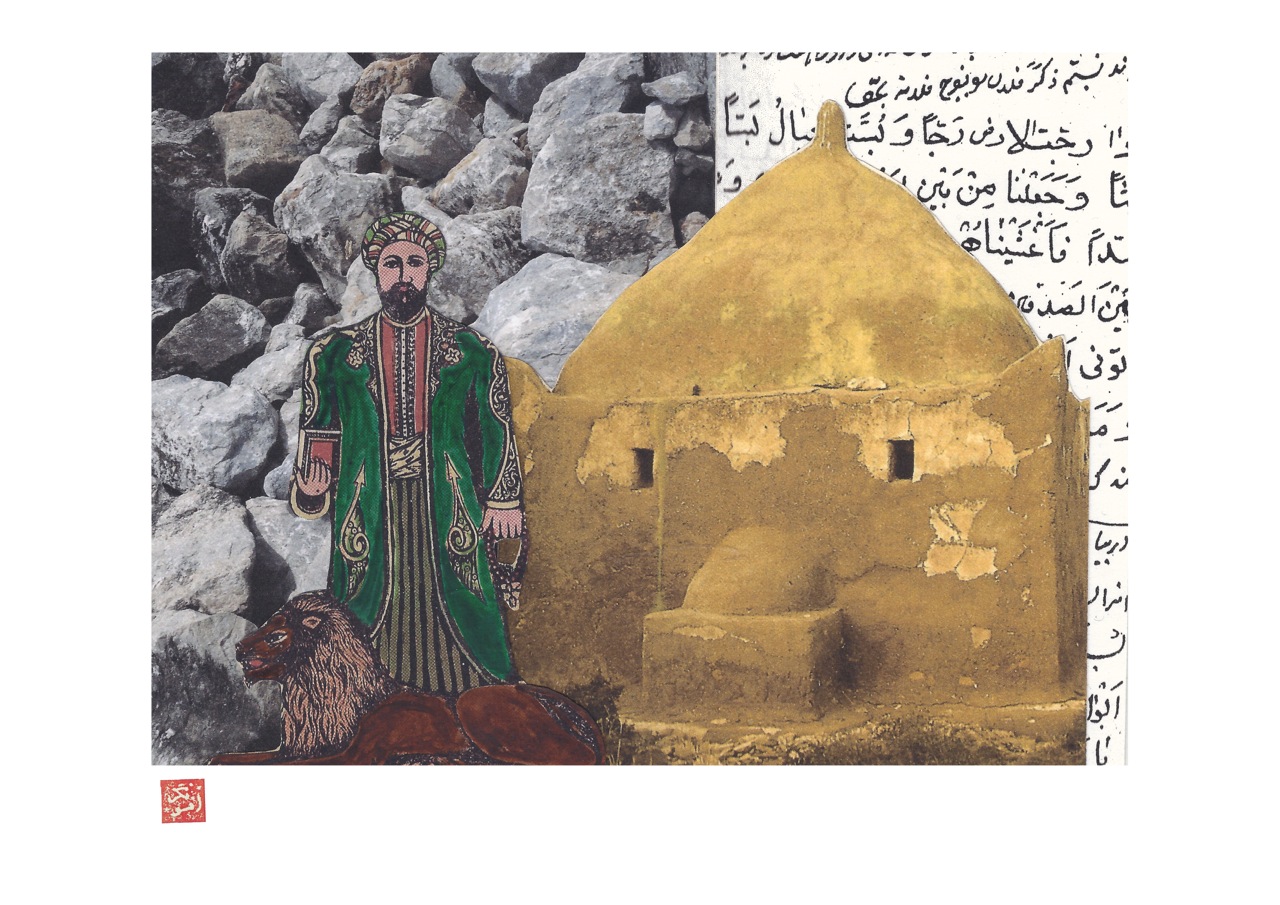 Email info@advocartsy.com for inquiries related to our artists.

The SPACE by ADVOCARTSY. Contemporary Iranian Art Platform hosting an array of art events, projects, and exhibitions in downtown Los Angeles and beyond.