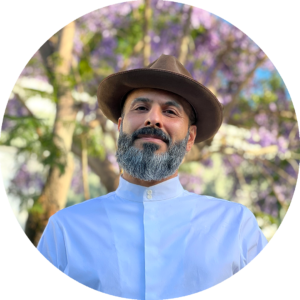 Kourosh Beigpour is an LA-based award-winning graphic artist and type designer. He received his BFA in 2003 from the Tehran University of Art, which is one of Asia’s oldest and most prestigious art schools and received an MFA in International Contemporary Art and Design from the Limkokwing University.

Koroush’s use of typography and graphic design have been published in more than 30 countries around the globe. Kourosh has an impressive portfolio that showcases his remarkable creative energy and signature designs. He is especially interested in Persian and Arabic typography and identity design where he uses illustration backgrounds to create those eye-catching works of art that stand out and ultimately show his love and appreciation for millennia old Iranian art and culture.

Calligraphy conveys not only a script, or an appearance of text, it also evokes the extraterrestrial expression of sacred meaning – An attempt to establish a pathway between the inside and the outside world of text, that links to form the meaning and inform the human mentality –

Therefore, symbolic and sacred signs can be found not only in the content of writing, but in the shapes as well. Calligraphy evokes the world of mysticism, where man is the embodiment of God as well as the collection of his names and attributes. Calligraphic letterforms embody the mystic and psychedelic realities of existence, illustrating a way to understand the sublime. Since the power of the word is the power of the creator, it only makes sense that the decorated illustrations behind calligraphic letterforms become the voice of transcendence.