Storytelling, in the artistic practice of Mobina Nouri, is a matter of connecting the ancient wisdoms absorbed from her own, Persian, culture to her personal experiences in the modern world. In the 1001 Nights series, the artist draws from the meta-fictions embedded within Middle Eastern folklore and, through tender and densely detailed hand-drawings outlined in ink upon canvas, transposes them into a place where they might articulate both intimate and universal contemporary terrain.

Each piece in this body of work explores a single vision relayed by Shahrazād whose meandering stories navigate complex territories, crossing geographies and cultures while negotiating love, tragedy, comedy, and erotica. Nouri travels through time, interjecting her own surreal elements and supernatural beings into these visions that span increasingly elaborate tales. Interweaving unexpected elements from Western and contemporary cultures such as The Birth of Venus by Sandro Botticelli and African Bush Elephant (2020) by Crystal Morey, Nouri conjures up alternative realities. Her stories take place in a dream-moment, a coming together of layers rather than linear movement through time.

The interrogation of the status of women is a recurrent theme throughout the artist’s work. Here, through the imposition of empowered female figures Nouri charters not only the supreme wisdom of the storyteller, Shahrazād, but also succeeds in destabilising gender roles through her figurative scenes that depict women engaging with traditionally masculine tasks. The artist invites the viewer to seek out hidden details, she guides them and surprises them as they zone-in upon the various microcosms and then step back to review the situation in its entirety. Her characters – humans, animals and natural elements – finely mapped out in ink, converge to form an eco-system and are, as chaos theorists contend, unavoidably and symbiotically linked. Nouri’s rethinking of these traditional tales connects with us in the current moment perhaps because she pushes forward values which have been eroded by Western societies. Her philosophy reflects that of 1970s philosopher, Robert Anton Wilson who spoke of the danger of one becoming lost in one’s own “reality tunnel”. A place where the individual is so focused on their personal values, beliefs and notions of the self that they compromise human collectivism. Instead, Nouri looks to Sufism for a solution that realises the unity in plurality and the multiplicity in unity.

“As we increasingly prioritise individualism, my aim is to show that we, as humans, remain deeply connected and, as suggested in the Butterfly Effect theory, the actions and experiences of the individual can significantly impact so many others. My art extols that we are part of one, interrelated, network of energy.” 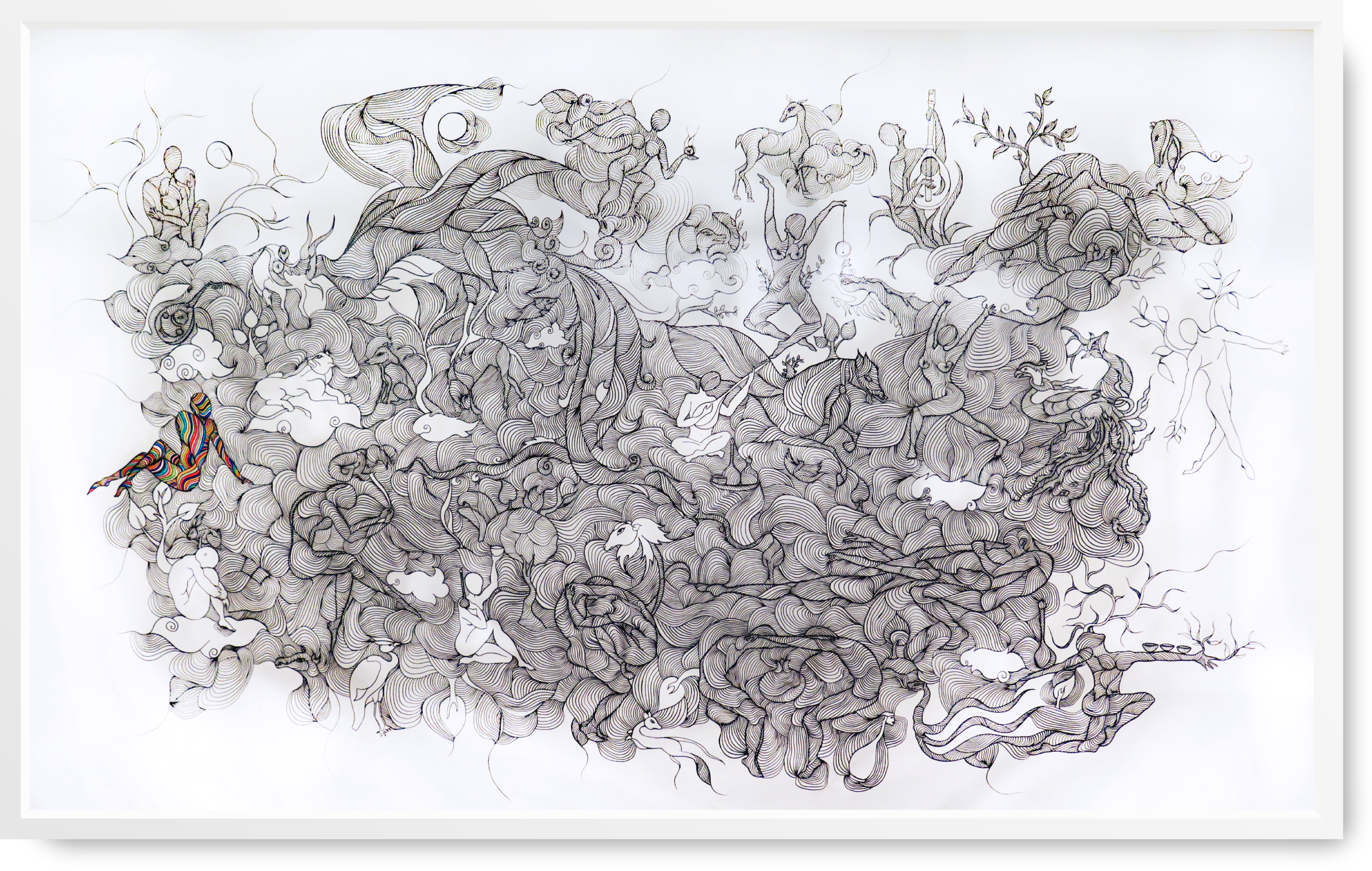 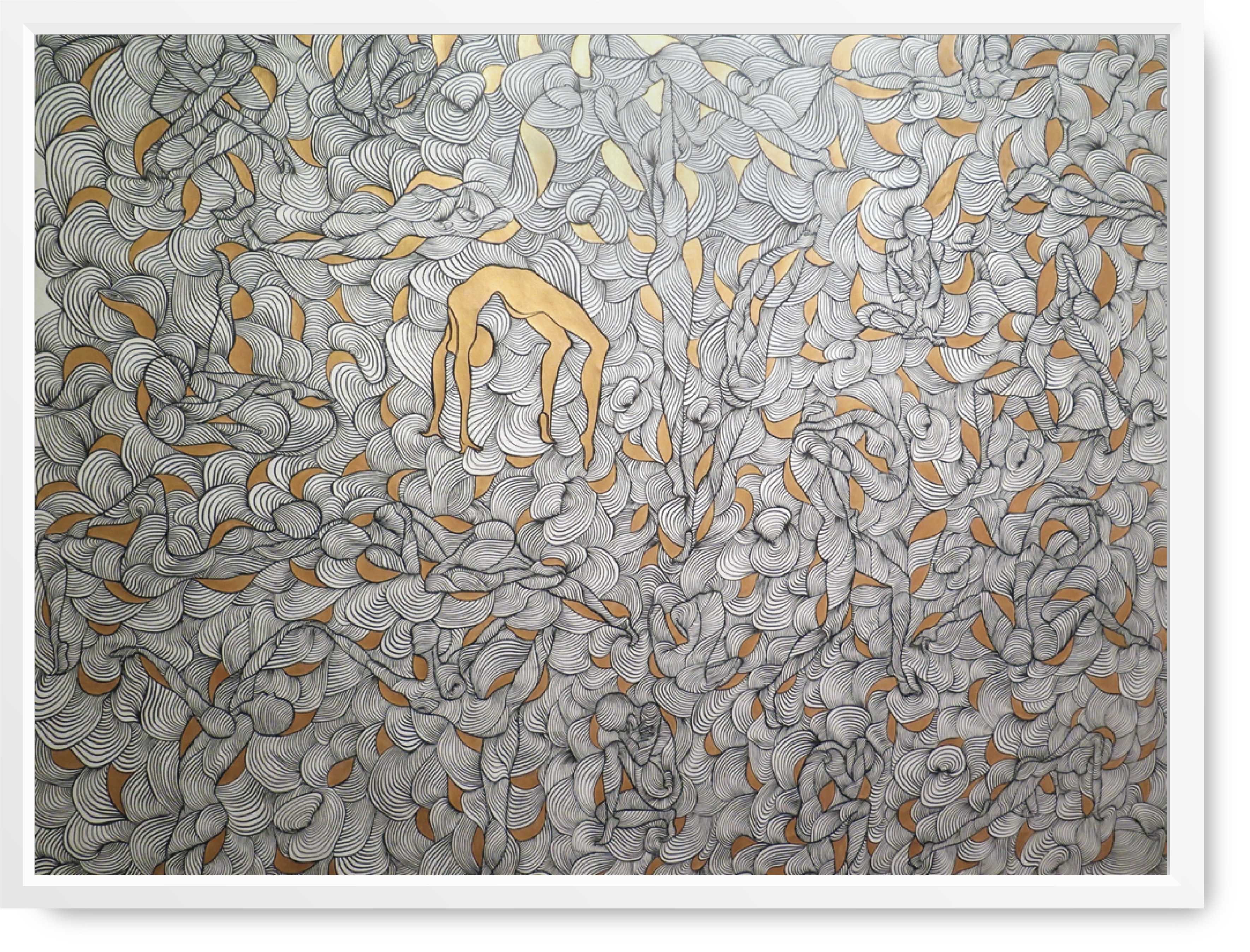 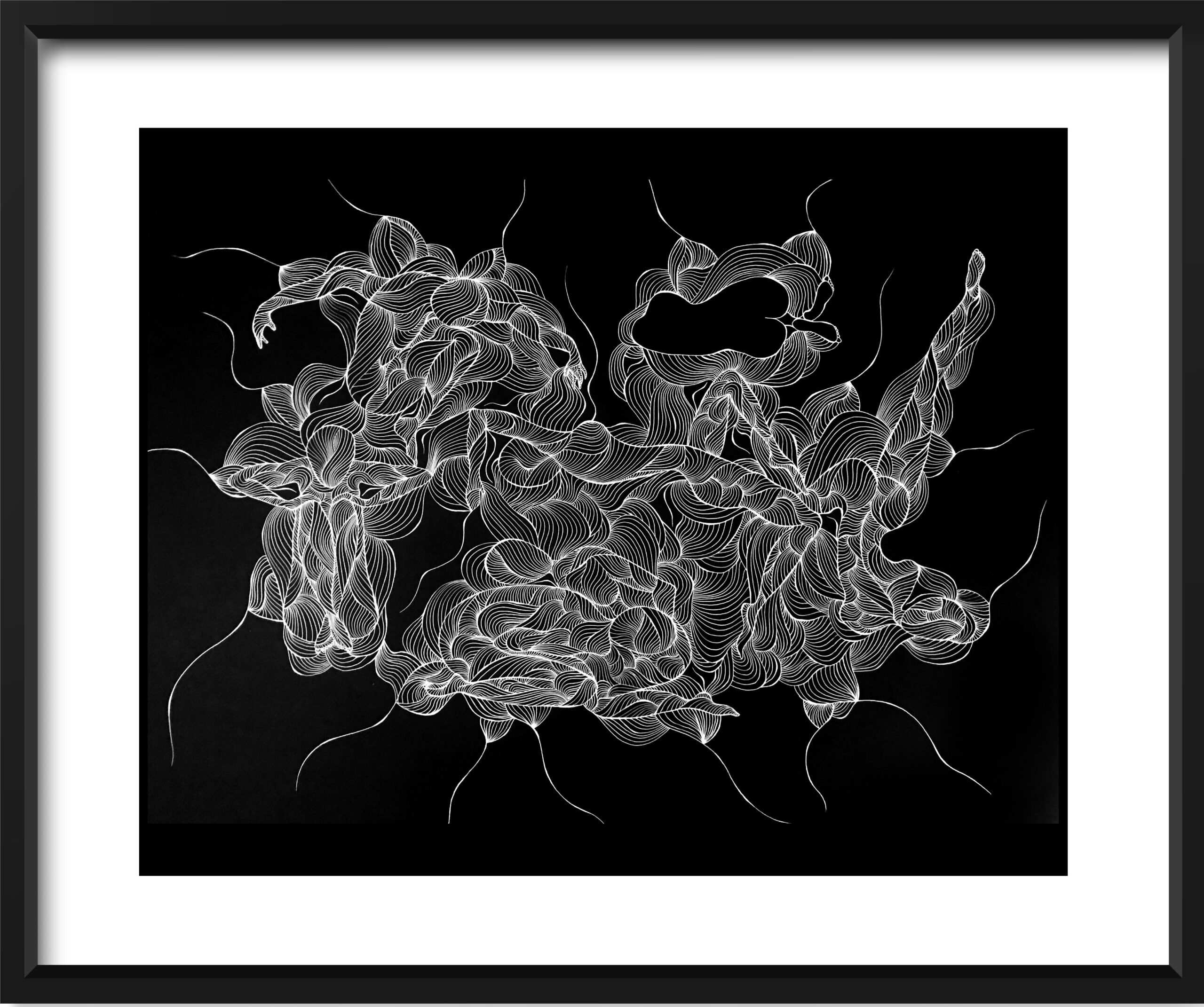 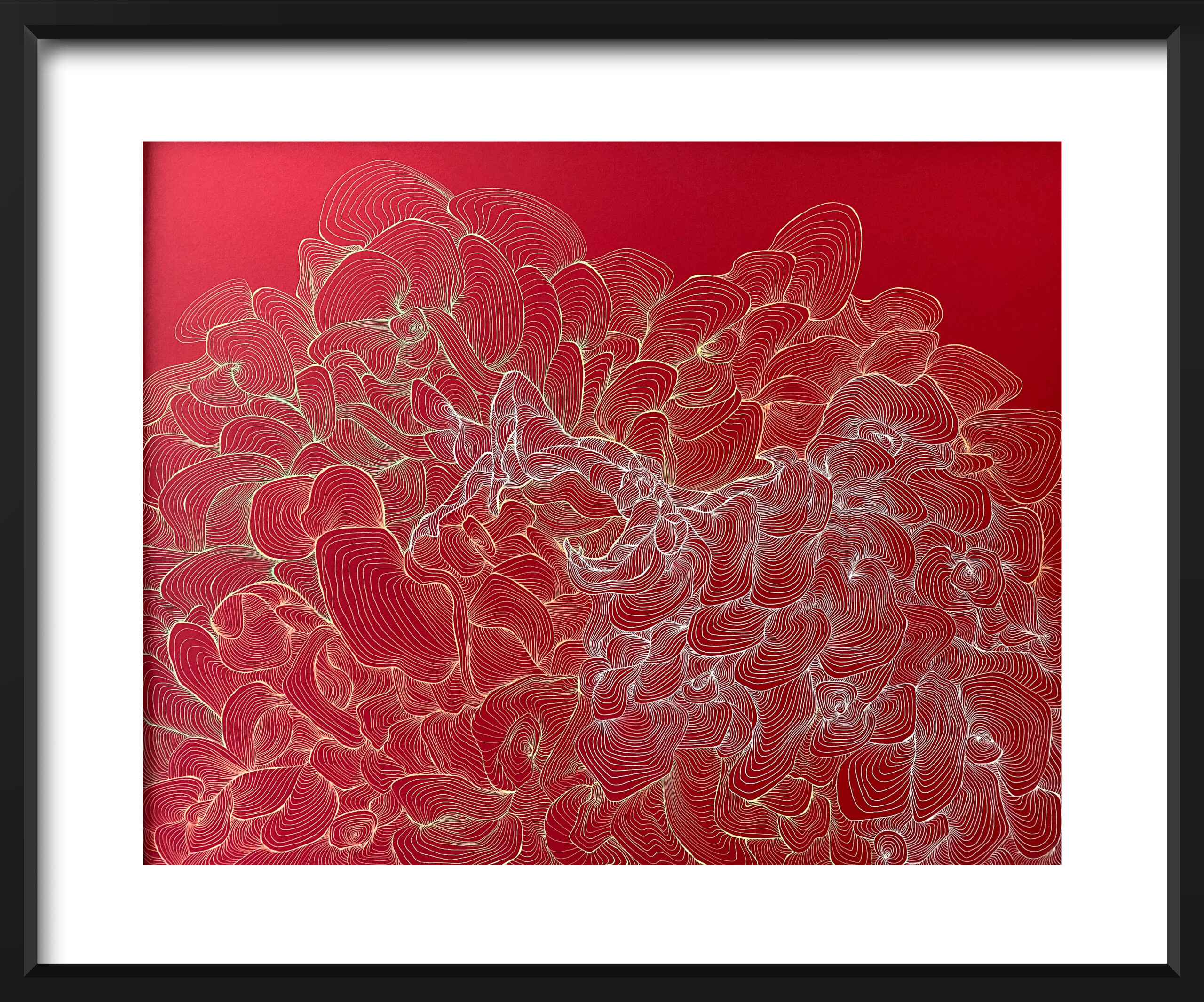 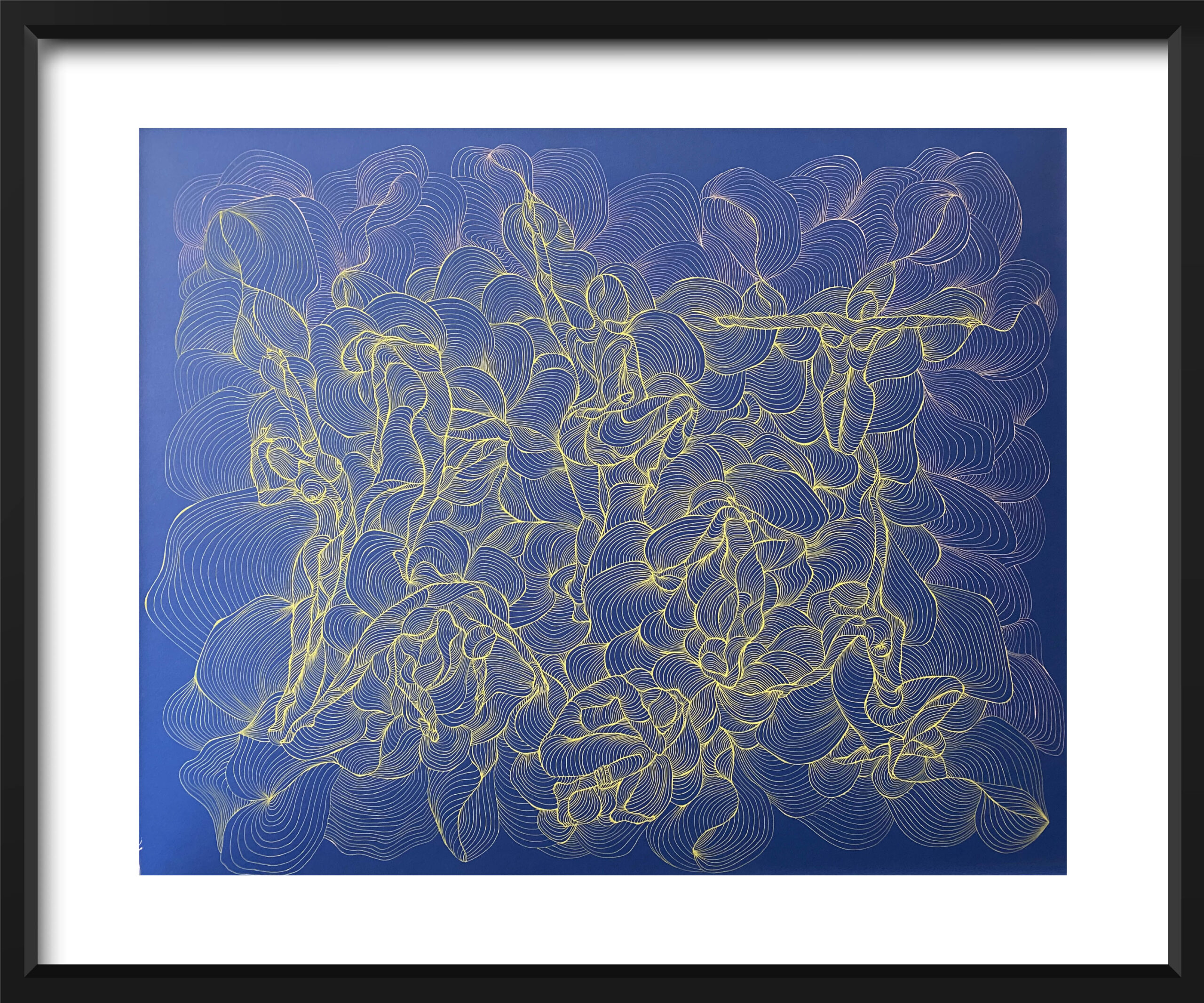 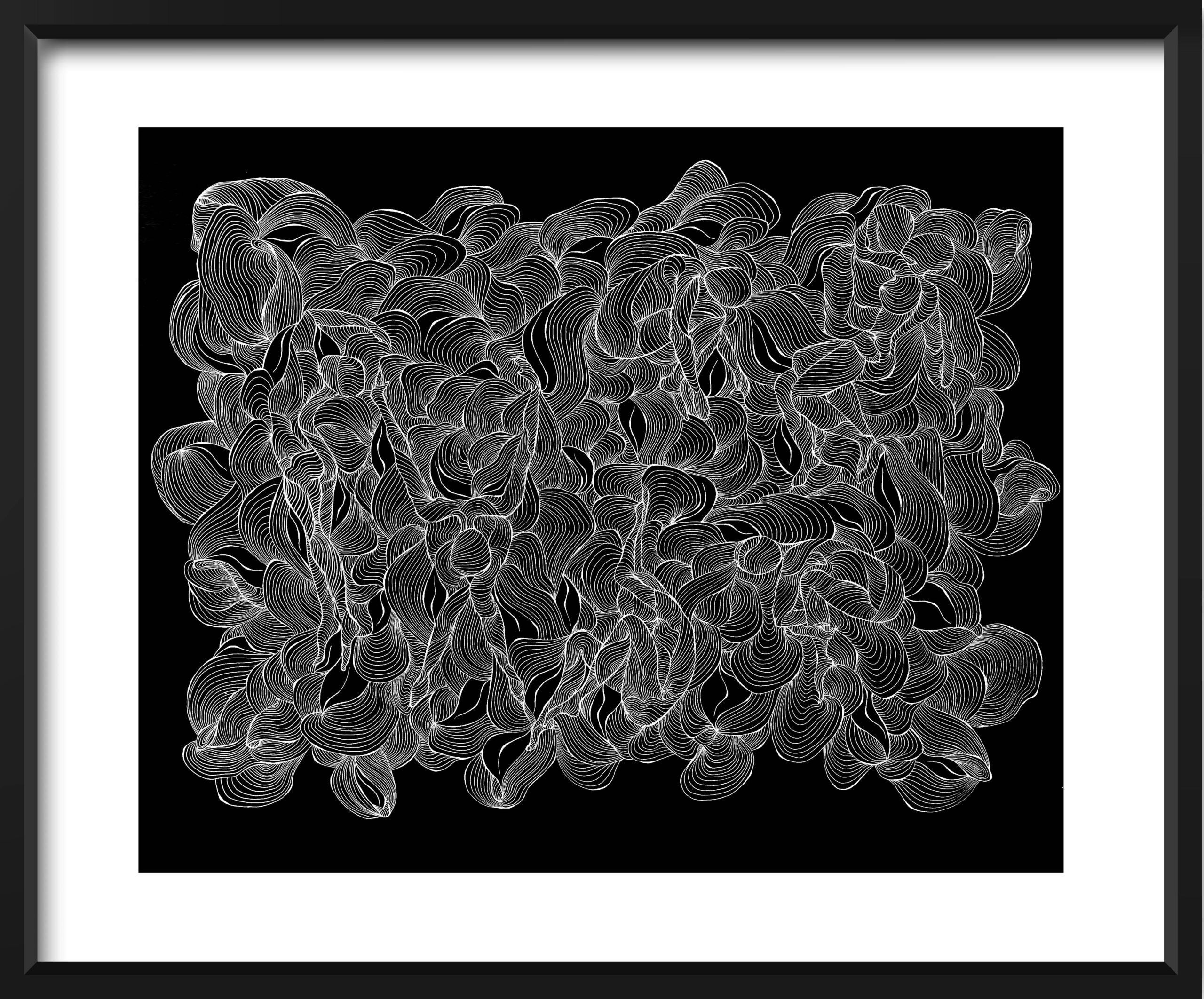 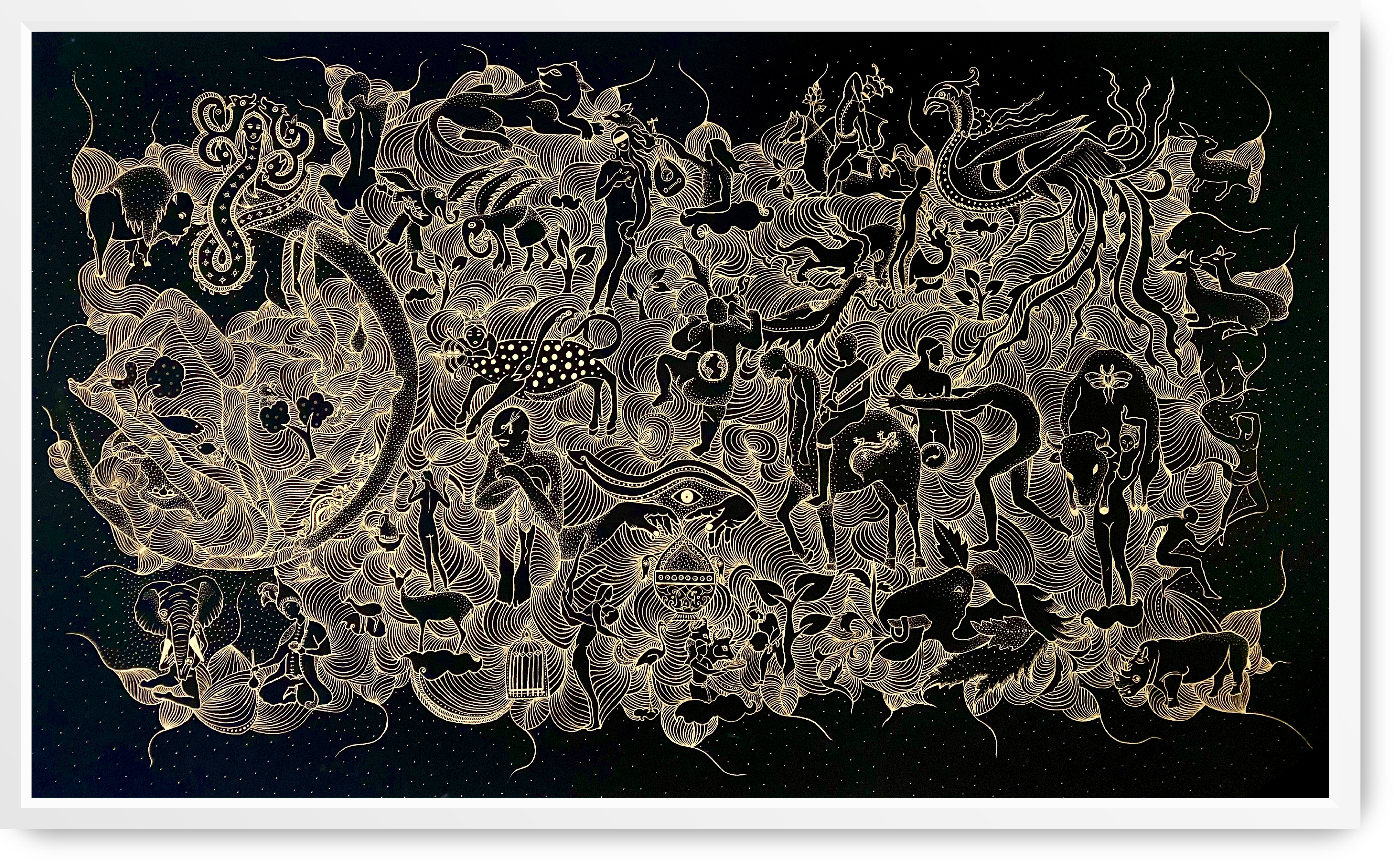 Mobina Nouri’s art routinely takes Iran’s rich literature as a lens through which to explore broader social issues in the modern world including gender balance, identity trouble and censorship. In the Poetography series, Persian poetry, with its concern for life’s lessons, forms an anchor between the past and present. By retracing and redefining its expressions, rooted in philosophy and mysticism, Nouri untangles personal gendered experiences in the East and West. Poetography lies at the intersection of multiple axis: East and West; figurative and abstraction; contemporary and traditional and was produced in collaboration with other musicians and photographers, combining multiple visions in order to collapse unilinear thinking.

Through the traditional Siah-Mashgh method of calligraphy, Nouri transposes poetic verses much-like a tattoo in monochrome, gold or silver, onto photographs of the female form. By converging the two she seeks to dismantle the various cultural and religious orders that have been imposed upon both women’s bodies and Iran’s cultural texts. She questions how ritual and regime relate to the elevation of language and what these words, associated with a high social space, mean to the viewer when inscribed across the naked body.

The artist worked first with her own image to navigate her personal experiences as a female immigrant caught between cultures, apparent in works such as Cascade (2018), before turning her visual vocabulary towards the limitations which have been imposed upon women internationally. Love Extension (2018) was shot in collaboration with Russian female photographer, Darya Orlova, who captured the bodies of two nude female figures, entwined. Nouri’s script, grazing their skin like a veil, seeks to foreground the shroud that continues to constrain homosexuality in many societies including that of her homeland.

By subtly distorting poetic verses so that the sentiments are recognisable yet barely legible Nouri crafts a language that might speak of the sublime but remains lost in translation. Through her creation of metaphors, the artist removes women from the mundane space that has been circumscribed to them and aligns with the pursuit of knowledge and the articulation of a reality that exists beneath the perceptible surface.

“The ability of the written word to unlock a space for the scrutiny of social issues, particularly relating to gender, underpins Poetography. I write Rumi, Hafez, Khayyam and other great Persian poets onto the female form, letting their powerful expressions and collective consciousness flow out, like musical notes to form a visual symphony. Poetography invites the viewer to soften their gaze, quiet their mind, and allow themselves to enter a receptive state where they might reconsider the status quo anew.” 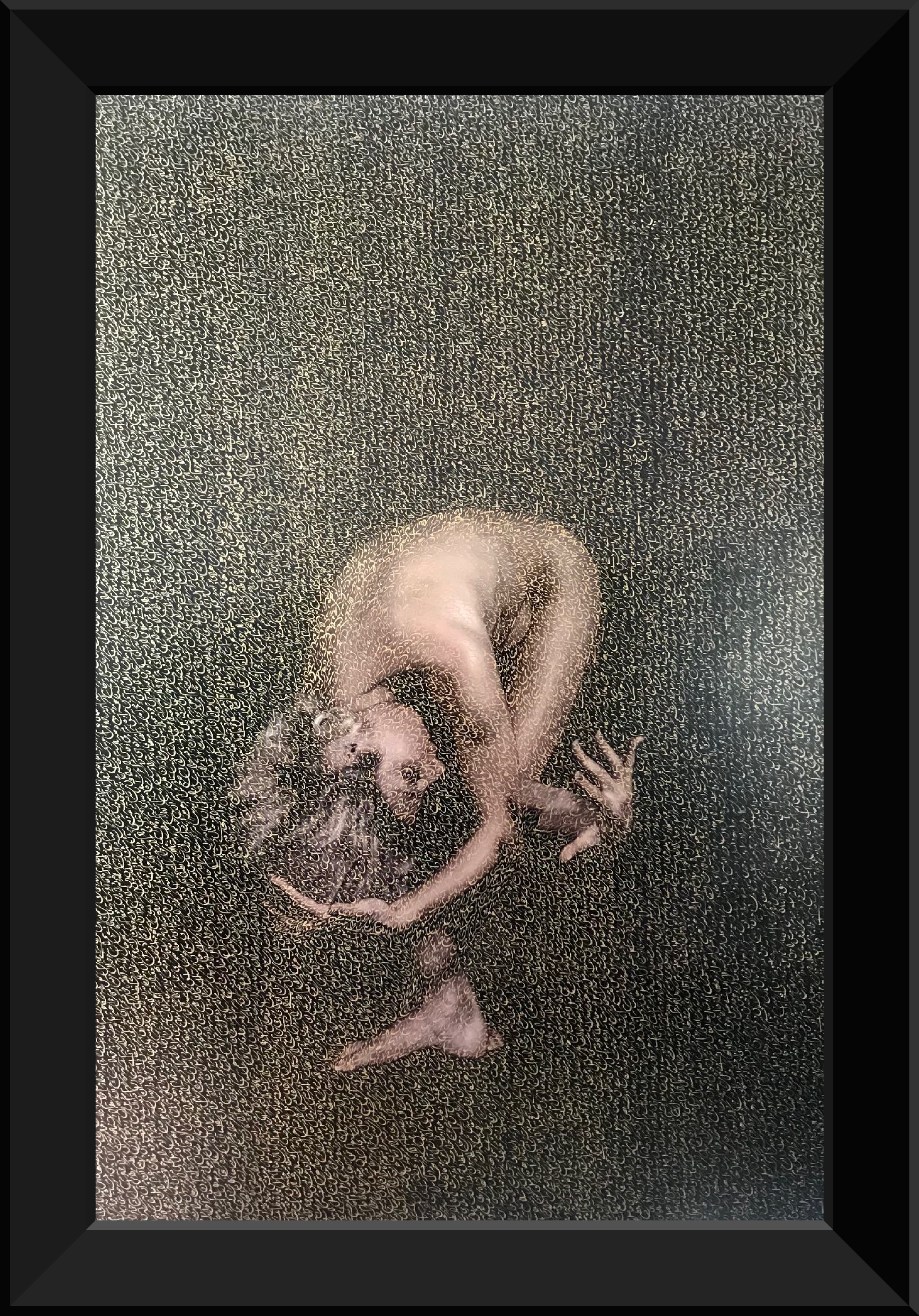 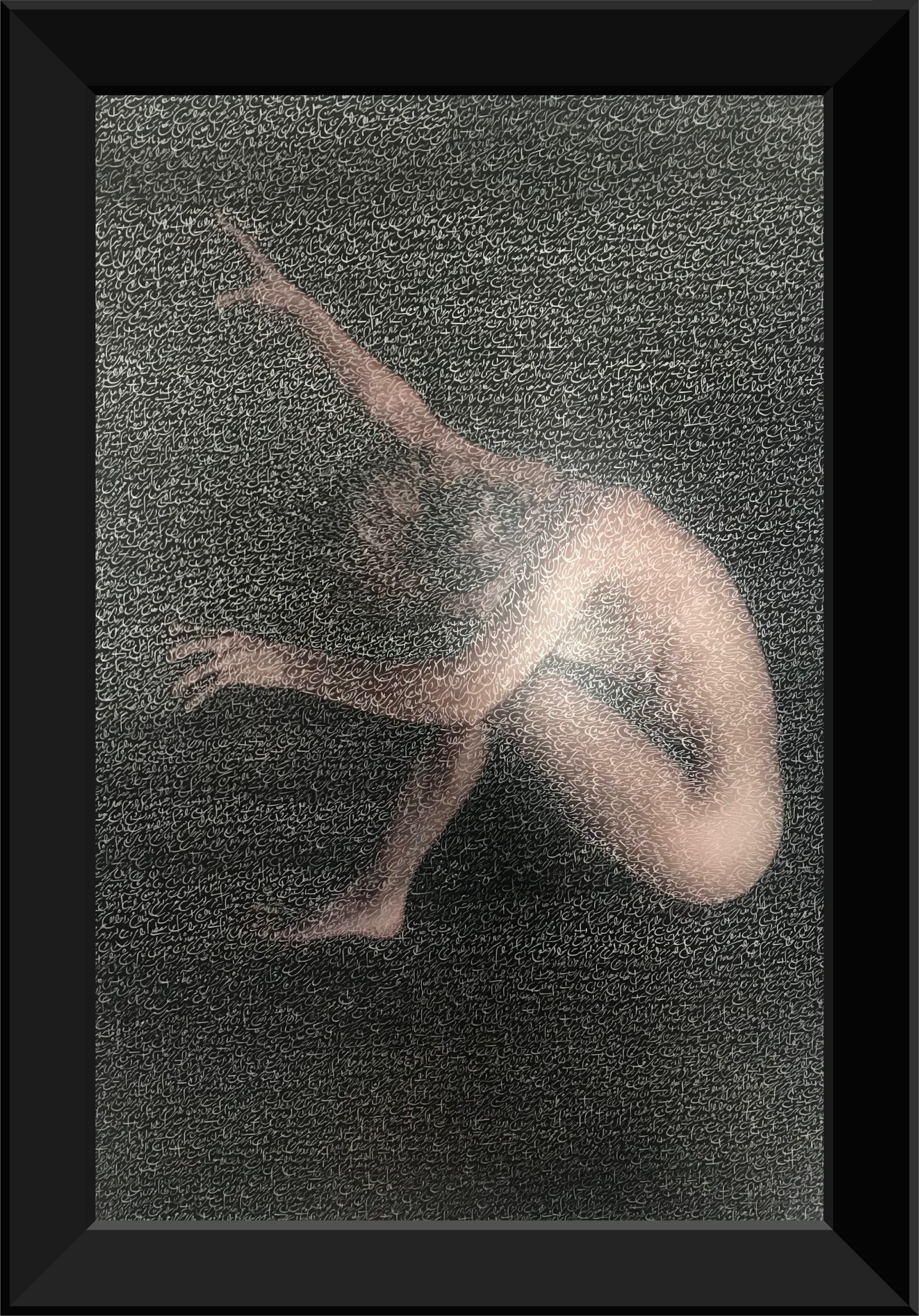 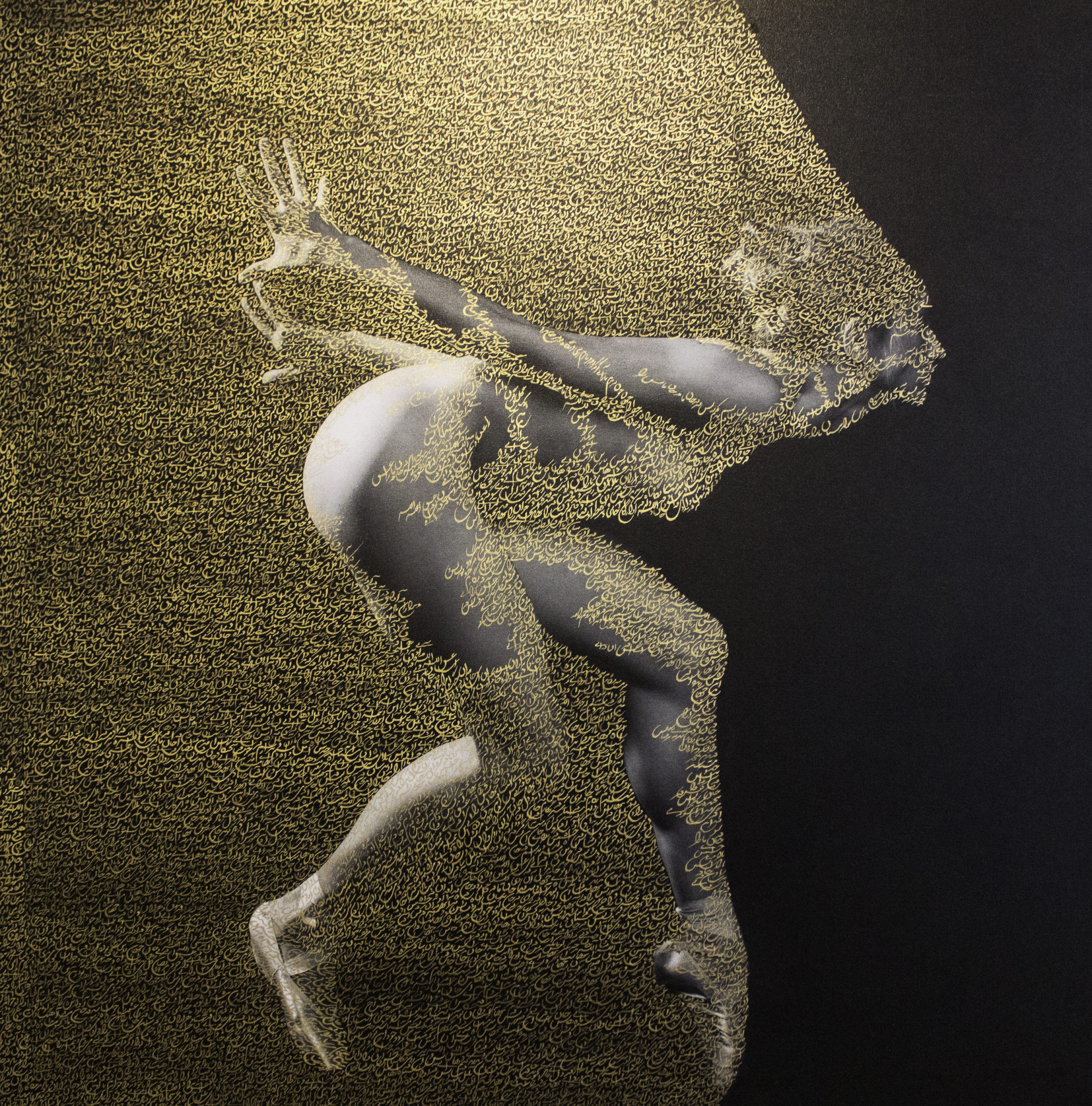 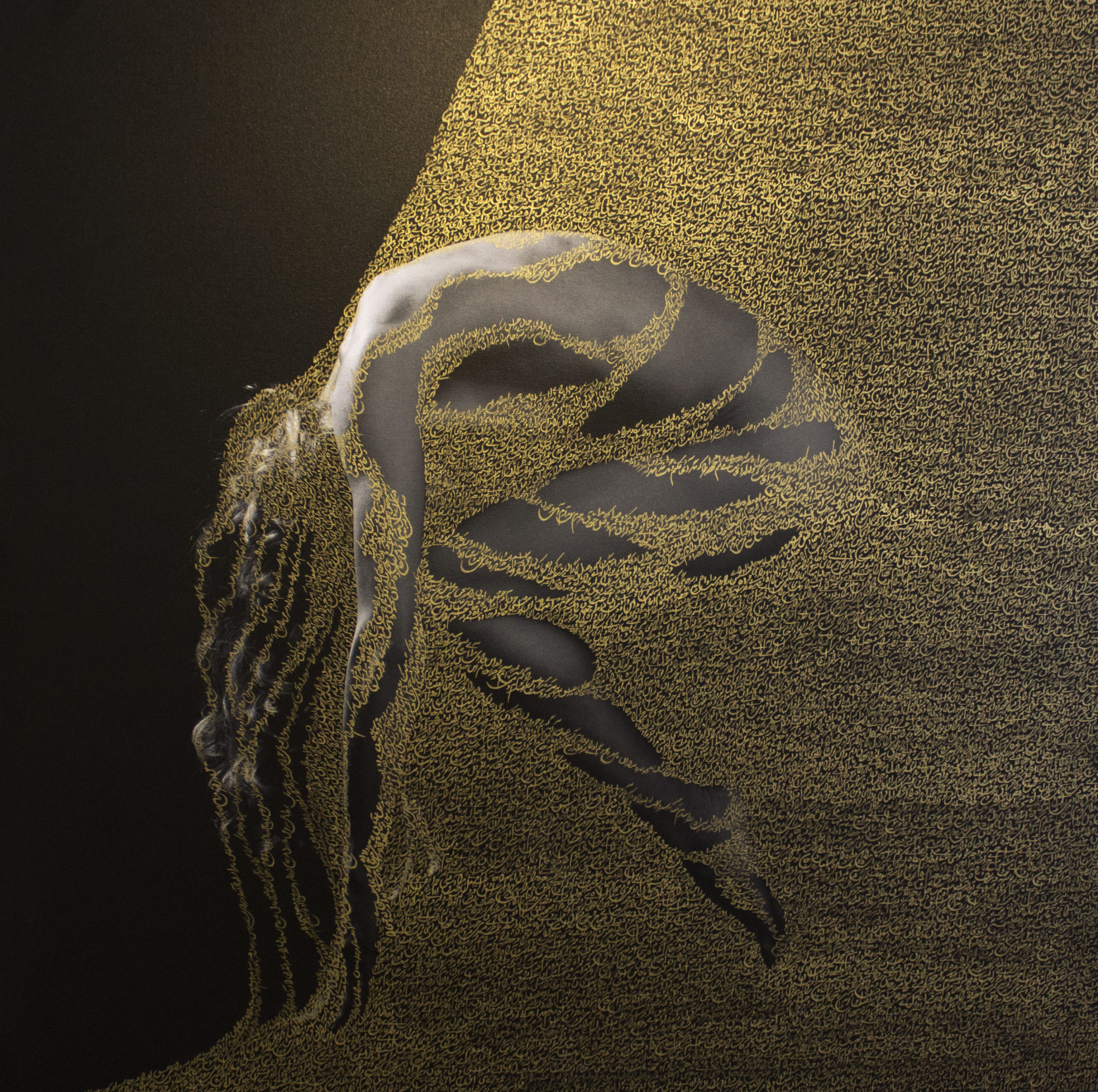 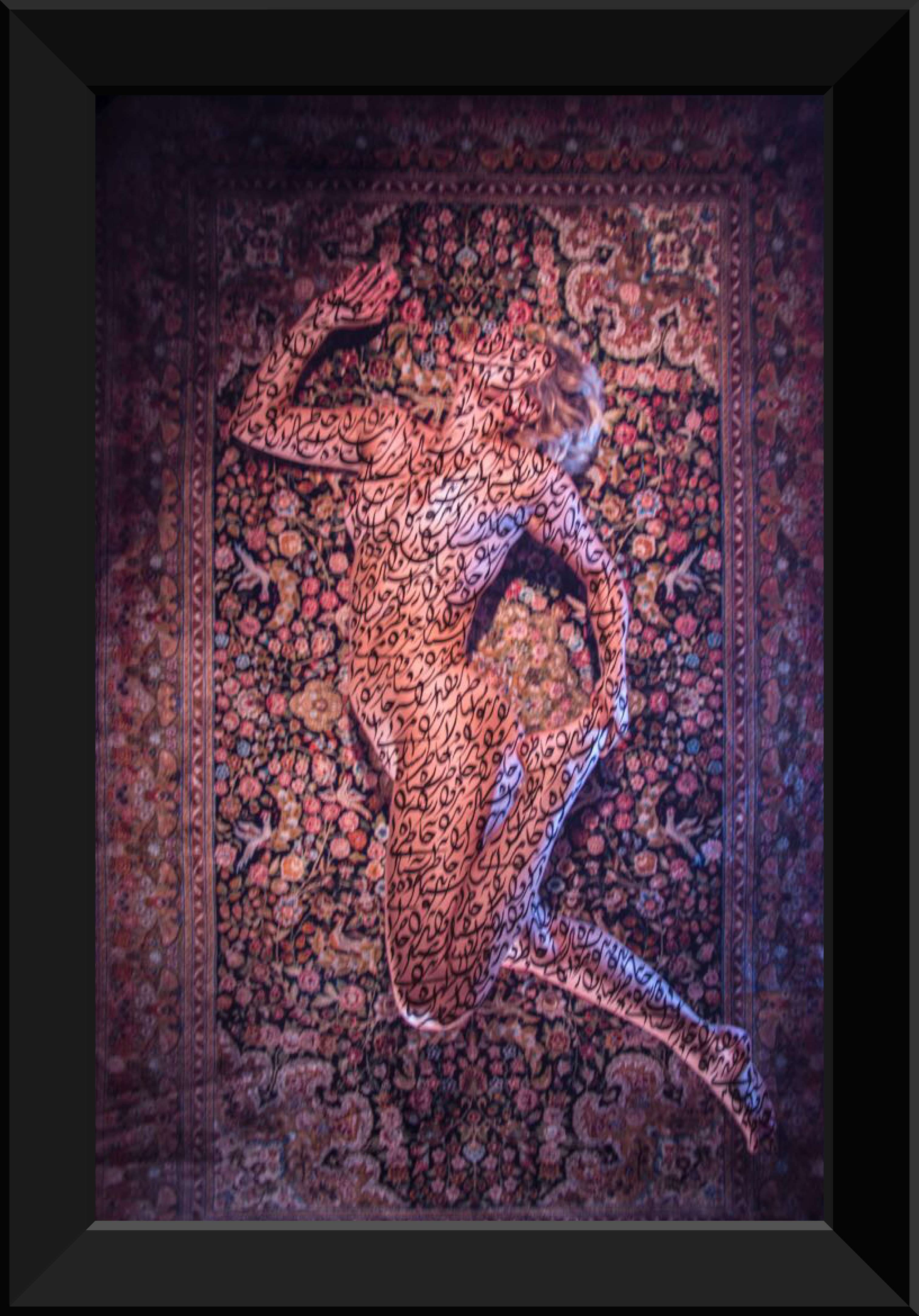 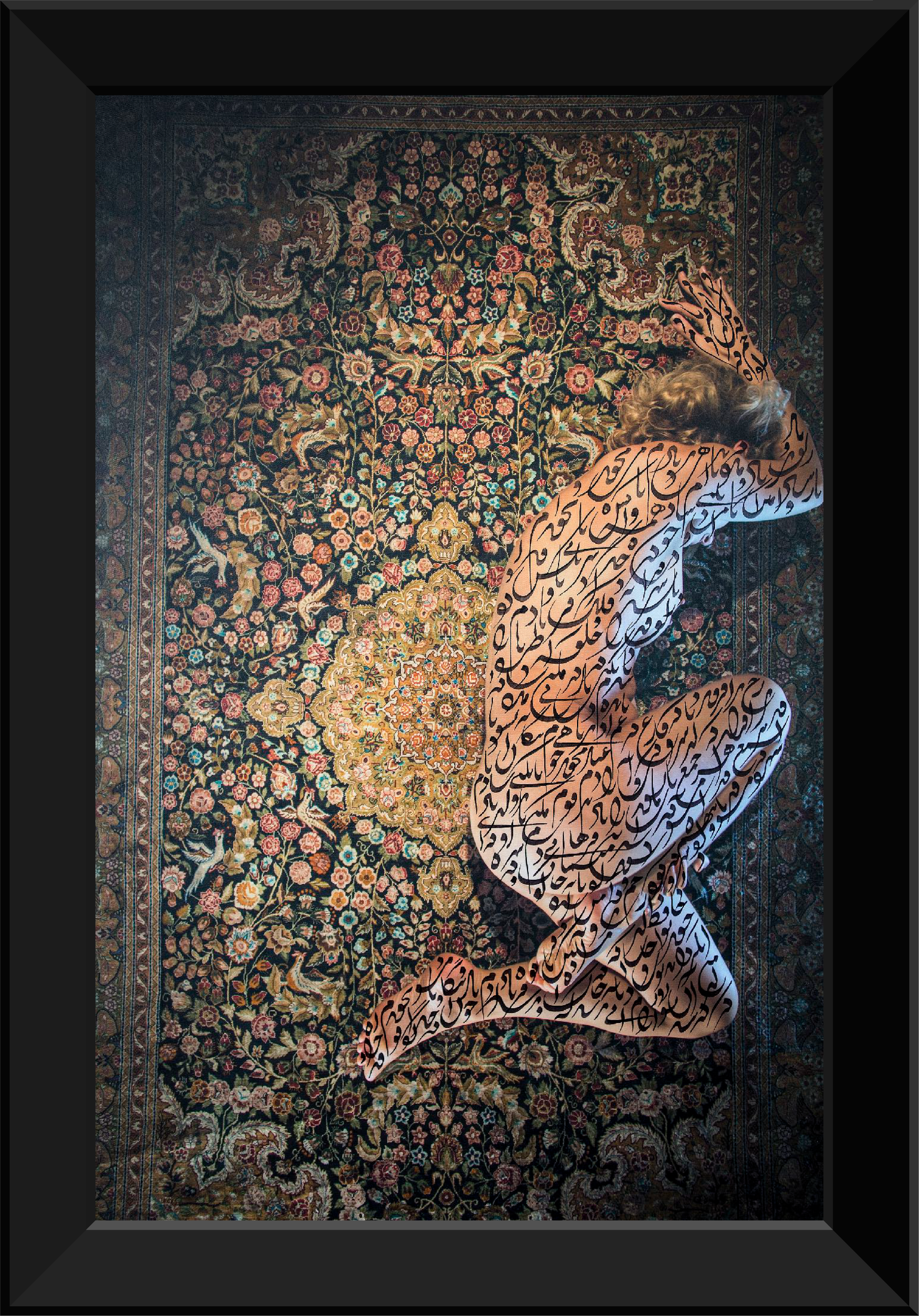