By StephanieJanuary 14, 2018Events
No Comments 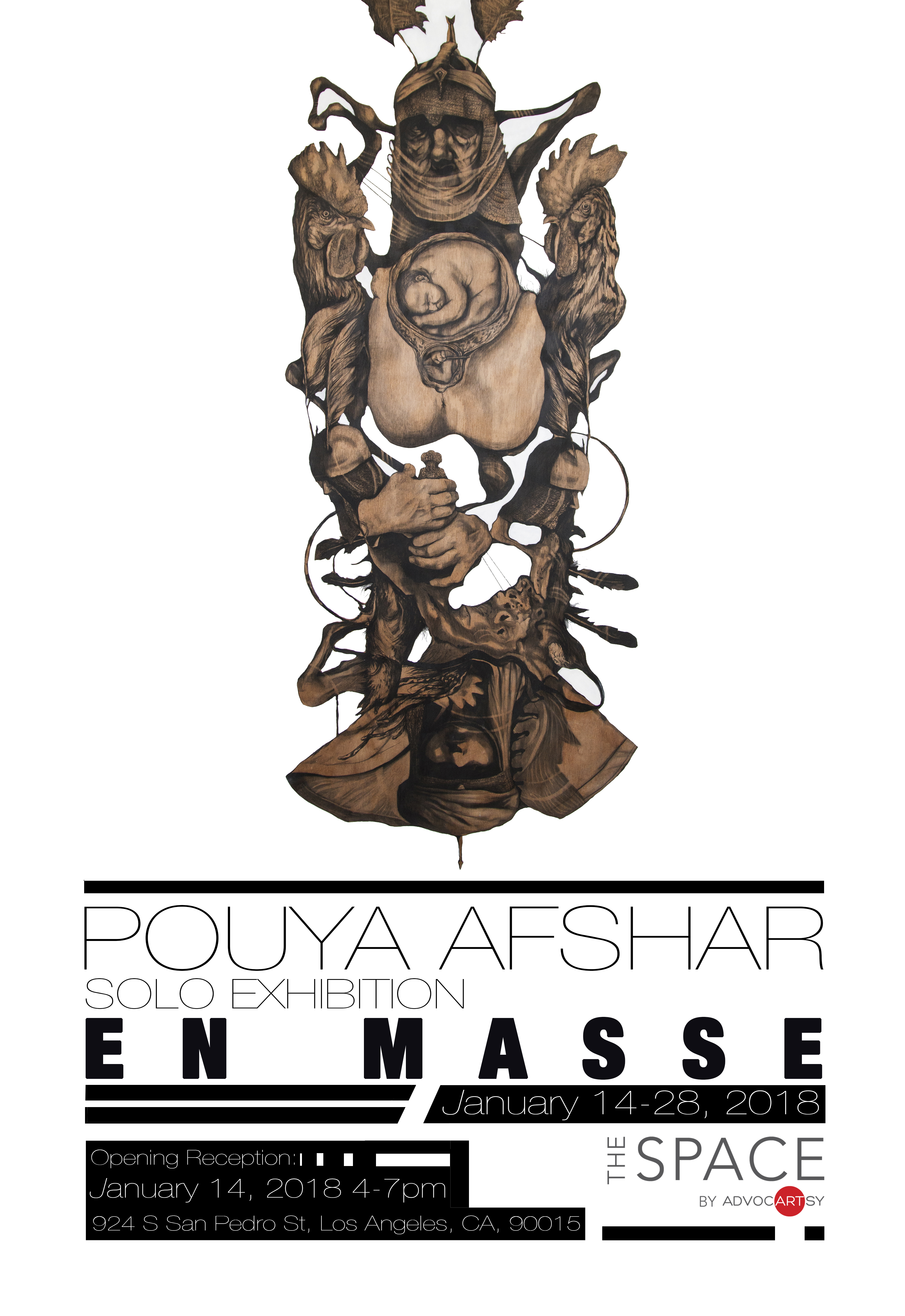 THE SPACE by ADVOCARTSY is pleased to present En Masse, a mixed media installation by Massachusetts-based Iranian-American artist Pouya Afshar. This is Afshar’s first solo exhibition with ADVOCARTSY.

En Masse is composed of paintings, drawings, and animations that explore the process of mourning on a personal, communal, and historical level. Afshar utilizes Persian and Muslim Shiite mourning rituals known as Ta’zie as a mode of contemplation. In Persian culture, Ta’zie is a centuries-old passion play inspired by historical and religious events that symbolize epic spirit and resistance.

En Masse was inspired by the death of Afshar’s mentor. Afshar’s search for internal peace led to an understanding of how individuals find catharsis as a group, whether as performers on stage or as audience members. Growing up in Iran, Afshar’s work is also informed by his exposure of Ta’zie plays. He materializes these emotions and traditions through paintings and drawings that he transforms into animation and video projections depicting his memories and dreams.

The notion of recollection is also explored in this exhibition through mounted layers of video projections that symbolize particles within one’s imagination. In one animation, a galloping horse—a key element of Ta’zie—is accompanied by a mash up soundtrack of Iranian percussion and a recording of the Catholic prayer Ave Maria.

“With this project, I aim to create dialogue on how one can recover from a loved one’s death and why community creates a platform to do so through art,” explains Afshar.

En Masse’s process of creation is as important to Afshar as the final product, which continues to evolve. The project has been his own grieving process and has pushed him, both as an artist and, more importantly, as a human being. “It has forced me to climb out of a protective shell and into a vulnerable atmosphere devoid of artistic ego,” says Afshar. “En Masse is a memorial service for whomever we miss. A reminder for us to embrace life’s inherited experiences and, if necessary, leave them behind.”

“Afshar’s work examines socio-political paradigms of Iranian culture through various media in order to offer an opportunity for cross-cultural understanding, while weaving his personal experiences with universal understandings of compassion and empathy,” says ADVOCARTSY founder Roshi Rahmana. “ADVOCARTSY is proud to represent Pouya in the United States.”
Afshar will be included in In the Fields of Empty Days: The Intersection of Past and Present in Iranian Art, presented by LACMA opening May 6, 2018.

Pouya Afshar is an alumnus from the California Institute of Arts Character Animation department and is a graduate of the University of California Los Angeles Graduate Department of Film and Television focusing in Animation and Digital Media. He has exhibited his work throughout the United States and Middle East, including: Harold M. Williams Auditorium at the Getty Center, Bovard Auditorium at University of Southern California, Royce Hall at University of California Los Angeles, Los Angeles County Museum of Art, Santa Monica Art studios, 18th street Art Center, and numerous galleries and art fairs around the world. Pouya has presented his research at Stanford University, Harvard University, University of Southern California, School of Museum of Fine Arts Boston, and Residency Unlimited NY. Pouya is the creator, character designer and producer of the animated series Rostam in Wonderland and the co-creator of 1PA2PA comics. He is currently an assistant professor of art and Design at University of Massachusetts, Lowell.