ADVOCARTSY Presents ‘The World is My Home’ 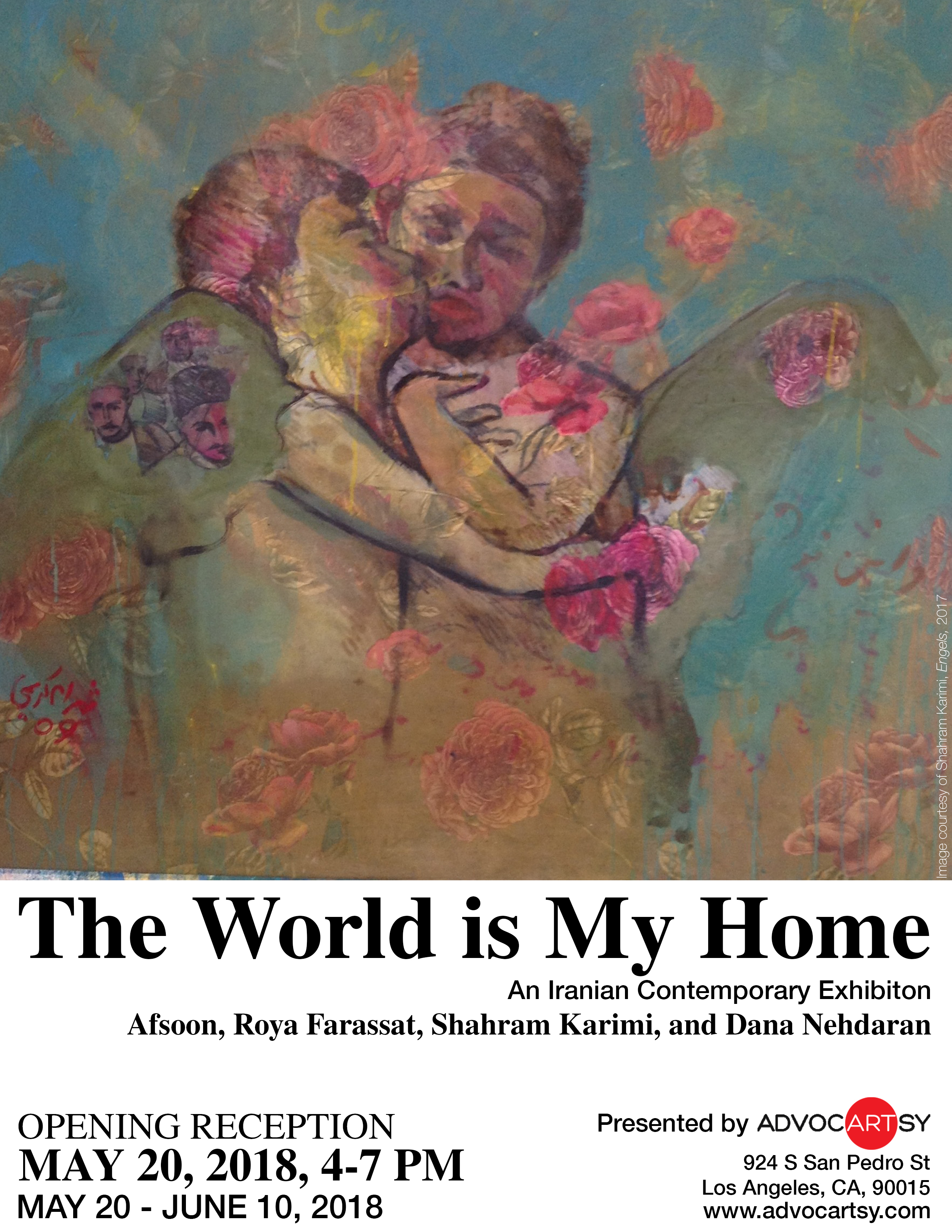 “Art is the most intense form of individualism that the world has known.”
-Oscar Wilde
Shahram Karimi, who recently curated In Between I and II at MANA Contemporary writes, Over the past decade we have witnessed serious attention towards Iranian art and artists. Through numerous international exhibitions Iranian art has established a strong and clear position in the art world. Therefore, we must begin to ask ourselves what distinctive characteristics modern Iranian art presents in relation to Iran’s abundant cultural heritage and what are the contributions of artist who live outside of Iran? The answer to this question will lead us towards a deeper understanding of the new Iranian cultural identity. We must strive to avoid familiar clichés and locate a more profound understanding of these new aspects and visions of Iranian art.
National artistic identity, arguably even socio-cultural identity, is a product of the sum of individual artistic creativity. Artists combine their history with contemporary influences of their particular present day social contexts. The common indicators of traditional culture no longer represent the identity of modern artists.
While this group of work is varied in form and content, it is the ideas of authenticity and unique gesture that unite them. Each artwork has an exceptional sense of spontaneity, freedom and resolve that suggests the character of the maker.
Afsoon
(b. 1961 in Iran, lives and works in London, UK) combines collage, photography, painting and text that deals with her nomadic lifestyle where the East merges with the West to create something that is at once familiar while simultaneously foreign. Afsoon has been exhibited in the United States, Europe and the Middle East. Afsoon is also part of several permanent collections include Los Angeles County Museum, The British Museum and the Berger/YSL Collection. She is included in LACMA’s upcoming exhibition, In The Fields of Empty Days: The Intersection of Past and Present in Iranian Art, opening May 6, 2018.
Roya Farassat
(b. 1964 in Tehran, Iran, lives and works in New York, NY) work is largely influenced by culture and tradition while embracing a distorted sense of reality. The themes of female Identity, isolation, violence and oppression animate her sculptures and paintings. Farassat has had solo exhibitions at Shirin Gallery, New York, NY, 2015 and Leila Heller Gallery, New York, NY, 2011. She has been apart of several group exhibitions including, Albin Polasek Museum, Winter Park, Florida, 2018; Station Independent Projects, New York, NY, 2017 and Gallery Kayafas, Boston, Massachusetts, 2017. She has also been interviewed and published by the New York Times, Boston Globe and Hyperallergic among others.
Shahram Karimi
(b. 1957 in Shiraz, Iran, lives and works between Germany and New York, NY) paintings portray the dilemma in the contemporary bicultural Iranian who seeks their historical and personal identity through wedding their personal past with contemporary form. He has exhibited worldwide including Iran, Turkey, Germany, Switzerland and the United States. He has had recent solo exhibitions at Leila Heller Gallery, New York, NY, 2016; Syra Gallery, Washington D.C., 2015 and Brigitte Schenk Gallery, Cologne, Germany, 2015.
Dana Nehdaran
(b. 1982, Chaharbagh, Iran, lives and works in New York, NY) received his BA in painting from Soureh Art University in Shiraz in 2007. Recent solo exhibitions include Rira Gallery, Dubai, UAE, 2013 and Shirin Art Gallery, Tehran, Iran, 2011. Nehdaran was apart of ADVOCARTSY’s Art Brief II: Iranian Contemporary North America, Los Angeles, 2016. Dana has been a member of the Iranian Painter Association since 2007. Nehdaran utilizes classical painting techniques to focus on the tension between past and present.
May 20 – June 10, 2018
Tuesday-Saturday, 12 pm to 5 pm
924 S. San Pedro St., Los Angeles, CA, 90015
Parking available on premise
ADVOCARTSY is a collaborative fine arts platform that addresses and engages
with Iranian Contemporary Arts both nationally and internationally.
Facebook: https://www.facebook.com/advocartsy/
Instagram: @Advocartsy
for additional information please contact info@advocartsy.com
for press inquires please contact press@advocartsy.com
Share Tweet Share Pin